The All Progressives Congress, APC Lagos Spokesperson, Seye Oladejo has responded to his People’s Democratic Party’s counterpart Taofik Gani who recently had called out the state Governor, Babajide Sanwoolu, to resist the plan to entrench undemocratic rule in the Local government areas of the state.

The All Progressives Congress, APC Lagos Spokesperson, Seye Oladejo has responded to his People’s Democratic Party’s counterpart Taofik Gani who recently had called out the state Governor, Babajide Sanwoolu, to resist the plan to entrench undemocratic rule in the Local government areas of the state.

The PDP opines that the move to entrench undemocratic councils will not only fester anarchy at that level but will be the albatross of the governor if any attempt to seek reelection in 2023. The Party asserts that all means legal shall be deployed to ensure that Lagosians have their self-chosen representatives at the councils and that if the APC machination prevents democratically elected representatives in the state as at when due, Lagosians must say no.

The voice of the major opposition party in the state is coming on the heels of statements credited to some chieftains of the APC in the state that Local Government elections will not hold and that Caretaker committees shall be set up at the levels.

“We are informed that the APC Plans not to conduct local elections this year. The tenure of the councils expires in about three months. Interestingly this information got to us from the APC Aspirants themselves. They are interested in contesting and like all other parties wish, election must be conducted. The APC is jittery of any local government elections as majority of the Councils have performed very disappointingly and cannot win any fair polls to retain control. We call on the state Governor and LAHA to resist any attempt not to conduct local government elections in order to prevent state of lawlessness at that government level”

The APC Spokesman responded in a press release sent to Lagos Panorama said, “let me congratulate the Lagos State PDP for characteristically finding its voice again as a result of the impending local government elections in the state”.

Oladejo opined that “for the umpteenth time, let me state categorically that the comatose Lagos State PDP only comes alive during the election season only to withdraw to its cocoon after the traditional perennial defeat”.

“Their monumental defeat during the recently held Lagos East Senatorial and KOSOFE 2 Lagos State House of Assembly by-elections has further exposed the ineptitude of the PDP opposition that’s bereft of winning capability as a result of their constant rejection at the polls”.

“The needless ranting about the local government elections that are not even due and for which we await an official pronouncement shows the idleness and needless rabble rousing of its confused leadership”.

“The baseless allegation or suspicion to entrench undemocratic governance at the local government level in the state is not in tandem with the fact that Lagos State has always had democratically elected leaders at the grassroots since the inception of this dispensation.

It’s also noteworthy that activities and preparations towards the local government elections as admitted by the opposition spokesman are only prevalent in the ruling party in the state. We can only sympathize with the fact that the opposition PDP will struggle to field candidates for the elections”.

“As a party that believes in the rule of law , upholds the provisions of the constitution of the Federal Republic of Nigeria and the tenets of democracy, we wish to assure Lagosians that local government elections will hold in our state at the appropriate time.

There’s absolutely no need to cry wolves where there’s none” he concluded.

Meanwhile Lagos Panorama reports on Monday, that the Lagos State Independent Electoral Commission (LASIEC) says it will soon launch a user friendly website in readiness for the forthcoming local council election in the state.

The Chairman of LASIEC, Justice Ayotunde Phillips, said this while opening a three-day pre-election retreat ahead of the local council elections in Lagos on Monday. The LASIEC boss said the website would further boost communication between the commission and her various publics.

She said that the forthcoming Lagos council poll would take into consideration new approach to the health and safety of voters and election personnel in line with the reality of the pandemic.

“Taking centre stage also, is the online incident reporting, through our website to ensure prompt resolution of crisis and other critical challenges “Also, our work on voter education and enlightenment has intensified. Inclusivity mechanisms for women; youths, persons with disabilities and other vulnerable groups within the population are also receiving proper attention,” she said Phillips explained that awareness and sensitisation programmes would be rolled out to appeal the teeming youths’ involvement and participation”.

“The electorates would be encouraged, informed and provided with basic information about participating in elections so as to freely express their political choices through the electoral process.

“This will, in turn, provide the much-needed credibility and legitimacy of the process,” she said.

The LASIEC boss pledged the commission’s commitment to continuous voter education through the sensitisation of the electorates on the importance of participating in elections. 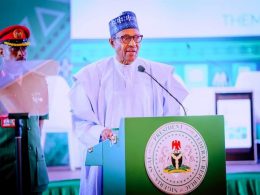 With high-impact projects across Nigeria, we have met the yearning of Nigerians, President Buhari declares at last Ministerial retreat

President Muhammadu Buhari on Monday in Abuja declared open the last Ministerial Performance Review Retreat of this administration, saying high-impact projects have been implemented across the country meeting the yearnings and aspirations of Nigerians.
byTayo Aderinola
No comments 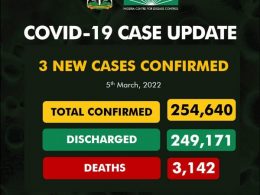 On the 5th of March 2022, 3 new confirmed cases were recorded in Nigeria
byLateef Idris
No comments

How I escaped from police detention – Oyo ‘serial killer’

Sunday Shodipe, a 19-year-old man accused of involvement in the rape and murder of some female residents in…
byTayo Aderinola
No comments