Director General of the Progressive Governors’ Forum PGF, Salihu Moh. Lukman has asked his ruling All Progressives Congress APC to embark on the collation of an electronically based data of all members of the party across the country.

Director General of the Progressive Governors’ Forum PGF, Salihu Moh. Lukman has asked his ruling All Progressives Congress APC to embark on the collation of an electronically based data of all members of the party across the country.

Describing the project as capable of repositioning the party, Lukman said a reliable membership database is at the soul of political party management.

The PGF DG made his position known while featuring on a programme on he African Independent Television AIT, ‘Jigsaw’ monitored Tuesday in Abuja.

“Secondly, we must have a national database because membership is everything to a political party. A situation where the administrative framework of the national secretariat is so weak and loose that it has no link to what is obtainable at the local government and state levels, creates its own complications. So, the first thing the new leadership must do is to reorganize the national secretariat in such a way that it has that organic relation between it and all the structures of the party so that at the ward level, even if somebody leaves the party, it will be immediately known by the national leadership, and if somebody joins the party, he should be quietly registered at the ward without the noise in the media, it should be seamless.”

APC had in late 2014 attempted to have an electronic database of its members, but the move was halted after operatives of the State Security Services SSS invaded the facility on suspicion that the then opposition party was using the building to illegally produce Permanent Voter Cards PVCs.

Lukman also spoke on the internal crisis that has rocked the party insisting that it is not a problem experienced only by the APC, adding that as a convergence of people from diverse backgrounds and interests, there are bound to be minor disagreements which do not necessarily mean that the party will implode.

“The major issue is that even before the merger, there was the notion that parties do not have the power to win the confidence of the people as it were. I also do not think that while negotiating for the merger, nobody believed it was going to be a party that can appeal to everybody. Even some people in the merger had sympathy for the PDP then.

“One basic issue is the need to have strong point about the need to institute reconciliation within the party. The major issue is that you can’t have a political party without a credible membership register. Good enough, the Caretaker Committee bought that idea and we have done it and that is the basis of the new book I have written. It is a contribution to help in an advisory capacity to support the leadership to know what needs to be done to make the party appeal to the Nigerian people.”

According to Lukman, the party must be run democratically where all the organs have the opportunity to discharge their functions unlike what obtained in the last National Working Committee NWC that did not function in tandem with the books of the party.

“There is the need for the party to be democratic which means that organs of the party should be meeting regularly to be taking decisions; when we talk about party supremacy, it is not the position of an individual leader that should serve as supremacy of the party when the organs are not meeting which is the major issue with the last NWC, the National Executive Committee NEC wasn’t meeting, the only organ that was meeting was the administrative organ and it was difficult at that time to now say that the Constitution of the party was being respected.

“The relationship between the political parties and Nigerians is so weak and that is the argument I am canvassing in that book, it dwells on the type of relationship the party should have with interest groups, non-state actors, youth organizations, women organizations, persons living with disabilities.”

The DG also threw a jab at former Governor Ali Modu Sheriff who had last week boasted that the APC will rule the country for 50 years, describing such comments as far from what should be coming from a progressive politician.

“The other issue is how the party organizes itself. We can’t have a party where for instance I have seen recently somebody aspiring for national chairmanship of the party saying the party needs a tough person to rule up to 40 years. That is not how a progressive should be thinking, a progressive should be thinking of how to endear himself to the citizens, it is not a question of how long you rule but how you are able to constantly endear yourself to the citizens. If you say you want to rule for 40 years, it is a question of going to lobby citizens to vote you, this is where we are coming from in terms of manipulating elections and what have you and these are the brutal issues in terms of politics in Nigeria which will take time to change, and it is not a one day thing, it is a life journey and we have to embark on that journey.”

He however lauded the Governor Mai Mala Buni-led Caretaker Committee for the manner it has been organizing the party congresses saying moving forward, it will be difficult for any one individual to hijack the organs of the party at the ward level.

On the spate of insecurity which appears to have worsened since the APC administration came to power in 2015, Lukman said contrary to insinuations, insurgency was not the only problem troubling the country pre-2015. He noted that there were cases of cattle rustling in the entire North as far back as 2013 as well as kidnapping in the Southern parts of the country.

He added that security agencies were overstretched adding that the country will continue to be confronted with some of these issues as long as a majority of Nigerians were not properly and meaningfully engaged. 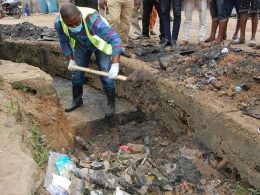 As part of measures to free all choked canals in Agboyi-Ketu LCDA,geared towards ensuring free flow of water during the upcoming monsoon season and prevent water stagnation in low-lying areas, Agboyi-Ketu LCDA will on Wednesday begin emergency desilting of blocked drainages.
byLateef Idris
No comments 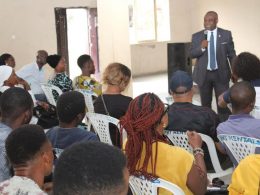 Not less than Sixty (60) youths in Ojodu LCDA would be trained on the mechanisms for turning waste into wealth, as the Council partners with Rotary Club of Gbagada District, Lagos State Government Ministry, LAWMA and KALTANI (which is one of Nigeria's largest cleantech plastic recycling and waste management companies), for the 3-day life-changing initiative.
byTayo Aderinola
No comments 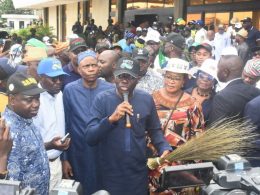 Gov. Babajide Sanwo-Olu of Lagos has said the emergence of Sen. Bola Tinubu as the All Progressives Congress (APC) presidential candidate is a win for Nigerians.
byLateef Idris
No comments