The Lagos State Governor, Akinwunmi Ambode, subtly alluded to the power of his estranged godfather, Asiwaju Bola Tinubu, as both shared the same platforms in Lagos on Monday at the public presentation of ‘Africa Arise and Shine,’ a book written by the Chairman of Zenith Bank Plc, Mr Jim Ovia.

The governor and Tinubu have been in the news in the past few days over the second term bid of Ambode.

Tinubu had refused to back the governor’s second term ambition despite pleas by notable people in the state and the country.

Instead, the Tinubu-led Mandate Movement in the Lagos APC had backed Babajide Sanwo-Olu, who obtained his form last Tuesday.

The chairmen of the 57 councils had also declared support for Sanwo-Olu.

Sanwo-Olu, a former commissioner in the state on Sunday formally declared his intention to vie for the Lagos State governorship ticket of the APC, promising to restore the glory of the state.

Notable APC leaders in the state, who were either allies of Tinubu or his followers, were at the declaration.

The event was underway when the APC national leader stormed the venue.

Ambode and other guests, including some state governors, were already seated when Tinubu came in.

Some guests were eager to see the reaction of both men since they were being seen together for the first time, but the godfather and Ambode greeted each other as if nothing was amiss.

When ambode was invited to speak at the event, he sent the audience laughing when he jokingly insinuated how powerful Tinubu is in the party.

At the event, Ambode was invited to speak immediately after Tinubu.

After acknowledging the dignitaries, the governor said he was not competent to speak after Tinubu had spoken.

He said, “Actually, I didn’t prepare to come and say anything and who am I to come and speak after the Jagaban (Tinubu) has spoken?”

The governor’s statement got the guests laughing.

During the photo session, Ambode also got the guests laughing when he quickly changed his position and went to stay beside Tinubu.

In his speech, Ambode said Ovia contributed to the accountancy and banking professions, calling on leading entrepreneurs in Africa to take time to expose the younger generations to their inspiring story and show them how to become successful business owners.

The governor said, “There is nobody that will read this kind of book and will not be inspired and I want to recommend it to everyone.

“It is always very good when people who have been successful in their career or profession decide to say something about how they really toiled to get to where they are.

“Some people just think people get to be successful without knowing that they actually toiled to become successful and this kind of book inspires our younger ones to become more resourceful and then more inspiring.”

Earlier, Tinubu, commended Ovia, describing him as one of the best of Africa, who had contributed to the growth of Nigeria and the African Continent.

Meanwhile, our correspondents gathered on Monday that the party leadership in the state had yet to change its mind on Ambode, as one of them told one of our correspondents that the governor’s “case is closed. Why are you still asking questions about it? What is your interest? When President Muhammadu Buhari wins the second term, he will be given a good appointment.”

But sources within Ambode’s camp said the governor had not given up as he was still reaching out to the aggrieved elders, as well as Tinubu.

The Lagos APC primary is scheduled to take place next week, but it was gathered that some of the elders would leave for Osun State on Wednesday and Thursday for the state governorship election which would hold on Saturday. 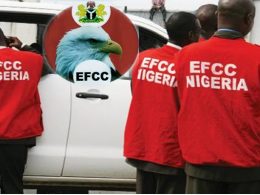 The Economic and Financial Crimes Commission, on Thursday, arrested a gang of three fake EFCC operatives in Lagos State.
byLateef Idris
No comments 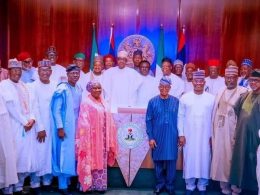 We must show positive qualities of APC at our convention, Buhari charges progressive governors

President Muhammadu Buhari has charged Governors of the All Progressives Congress to ensure that the forthcoming convention to pick a presidential candidate reflects all the values and virtues of the party.
byLateef Idris
No comments

· Minister thanks Lagosians for their patience, understanding, cooperation · First Phase completed while work commences immediately on…
byLateef Idris
No comments