The News Agency of Nigeria (NAN) reports that Falola apart from being a Polygraph Expert, is a Security Consultant with the Halogen Security Company Ltd.

Led in evidence by Mr Babajide Boye, the Chief State Counsel, Falola disclosed that he had worked with Halogen Security Company Ltd for 15 years.

Listing his qualifications, he said: ” I am a graduate OF Kwara Polytechnic and the University of Lagos. I was trained by the American Institute of Polygraph Examination.

“I have a Diploma in Polygraph Examination from the United States. I’m a retired military intelligence operative, I served in the Nigerian Air force Intelligence Squadron.

“A polygraph is a lie detector test that measures and records several physiological indices of a human being such as the breathing, blood pressure, pulses and skin conductivity.

“I have conducted over 250 polygraph examinations in Nigeria for private individuals, financial institutions and multinationals.

“We have an archive of all our polygraph tests which can never be erased.We didn’t even know this matter will come up in court,” he said.

The polygraph expert in his lengthy testimony, said he was contacted from the United States by the father of the Chrisland pupil who enquired about his company’s polygraph services.

He noted that shortly after, the child’s mother came to his office for the test with her uncle as well as Adenekan, and representatives from the school.

“Prior to that day, the child’s mother contacted us and told me that her daughter was molested by a teacher of the school and she wanted to conduct a polygraph on the teacher.

“The school authorities called me on Nov. 14, 2016 and I requested that that the alleged perpetrator, the mother and representatives give letters authorising Halogen to conduct the test.

“The next day, two school representatives, the alleged perpetrator and the mother came with an uncle of hers.

“We all sat together because I needed to know the scenario. I was told the perpetrator allegedly molested the child and the school representatives denied that it happened.

“Mr Adenekan said he needed to exonerate himself and said he would take the polygraph test and we all agreed that he should take the test.

“Only the examiner and the examinee are to be in the polygraph laboratory and consent form was signed by Adenekan and it said he was not threatened nor maltreated into taking the test.

“We don’t do polygraph tests for pregnant women, underage children, the elderly who are 70-years-old and people with specific ailments like hypertension and diabetes.

“There must be no pause and within 25 seconds, you must give an answer.

“I asked Adenekan if he was diabetic or hypertensive and he said no and added that his family had no history of the ailments.

“The result are in three stages which are deceptive, non deceptive and inconclusive.

“The outcome of this was minus nine which showed that Adenekan was deceptive to the case under investigation as at that time.”

Falola noted that his level of competency and accuracy for polygraph tests is 99.9 per cent adding that he sent the polygraph result to his clients via email.

During Falola’s testimony, Boye the prosecutor sought to tender the result of the polygraph test, consent form and polygraph charge sheet as evidence.

Mr Olatunde Adejuyigbe (SAN), defence counsel to Adenekan objected to the tendering of the documents.

He told the court that the polygraph evidence was not recognised under Nigerian law.

“The totality of this evidence is inadmissible according to Section 57 of the Evidence Act.

“There is nothing in Sections 58 to 76 that admits an opinion as to whether a person is lying.

“The opinion of experts is circumscribed in Section 68 and Section 76 says that if you purview the provision of the Evidence Act, you have to seek other laws validly on force in the country.

“There is no law that grants the admissibility of polygraph examination in our Nigerian laws. His oral evidence and what this document seeks to talk about is expressly excluded by Section 67.

“The revised Evidence Act of 2011 has taken all technological advances into consideration. Polygraph evidence is a foreign practice and our jurisprudence does not recognise it.

“It will be a dangerous practice for the courts to openly embrace it. I urge this court to mark the documents tendered as rejected.”

Responding, the prosecution said the SAN misinterpreted the Evidence Act in his submission.

“The question is that are these documents relevant, part of the facts in the issue and are they connected?

“The defendant was not compelled.He went voluntarily and signed the consent form.

“Proper foundation has been laid in relation to Section 84 of the Evidence Act and we submit that these documents are admissible.”

Olayioye insisted that she spoke to the child’s mother when she brought her daughter to the Mirabel Centre.

The defence disputed her claims by showing her records of the mother’s courtroom testimony in which she admitted that she did not speak to a doctor at the Mirabel Centre.

The medical doctor also said that she did not notice scars or abrasions in the genital area of the child when she examined her.

Justice Sybil Nwaka adjourned the case until Oct. 5 for ruling on whether the court will admit the documents as exhibits.

NAN reports that Adenekan who was arraigned on Jan. 29, pleaded not guilty to a charge of defilement of a child.

According to the prosecution, the defendant defiled the complainant by having unlawful sexual intercourse with her.

The offence violates Section 137 of the Criminal Law of Lagos State 2011 which recommends a life sentence for anyone convicted.

The Nigeria Center for Disease Control (NCDC) on Thursday night revealed that 1,102 persons have died from Coronavirus…
byLateef Idris
1 share
1
0
0
No comments 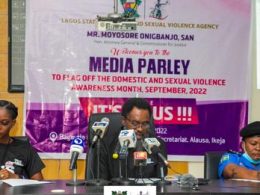 The Lagos State Domestic and Sexual Violence awareness month with the theme: “It is on Us”, was flagged off today with a media briefing at the Bagauda Kaltho Press Centre by the Honourable Commissioner and Attorney-General for Justice, Mr. Moyosore Jubril Onigbanjo (SAN) as part of activities to commemorate the annual event.
byLateef Idris
No comments