Mr Ladi Lawanson, the Lagos State Commissioner for Transport, says it is not the plan of the state government to delay ongoing road construction projects in the Abule-Egba-Oshodi axis for political motives.

Lawanson told the News Agency of Nigeria (NAN) in Lagos on Wednesday that Gov. Akinwunmi Ambode of Lagos State has been putting pressure on the contractors handling the projects for quick delivery.

“It is not in the government’s interest to prolong the life span of any project, because the government is passionate about delivering it on time.

“Most of the projects that are ongoing have December 2018 expected completion date, so, it is amusing that people are saying it is being delayed for political motivation.

“I have accompanied the governor on the inspection of the ongoing projects, most times on Sundays, and I can tell you the governor is putting lots of pressure on them (contractors) for quick delivery,” Lawanson said.

The construction work in the axis has been on since 2017, with motorists passing through the route having hectic time due to gridlock.

According to Lawanson, anybody with knowledge of construction will know that it is actually in the best interest of a contractor to be fast with a project, because the longer you stay, the more expensive it becomes.

The commissioner said that the government was particular about the quality of work, at the same time considering the plight of the people during morning and evening traffic jams on that corridor daily.

“We empathise with motorists and commuters over level of traffic situation along Abule-Egba, Iyana-Ipaja, Cement, Ikeja Along, up to Oshodi corridor, and we apologise for the inconvenience encountered as a result of the construction.

“We crave the indulgence of the Lagos residents to understand that development comes with a price sometimes, but it’s all intended for a better tomorrow,” he said.

Mr Adebowale Fajinmi, a civil servant, in an interview with NAN, urged the state government to expedite the project to allow free flow of traffic along the routes.

Fajinmi said that usual traffic jam in the early hours of the day along Iyana-Ipaja, Cement to Oshodi axis of the road had earned lots of people queries in their places of work.

He said that some motorists spent hours in the morning from Iyana-Ipaja to Oshodi as a result of the ongoing construction along the road.

“We are begging the government to fast-track the pace of the road construction along the axis and Agege bridge because the early morning traffic jam is unbearable.

“We appeal to the government to consider us and expedite the projects, because people are saying that the government may want to use it for 2019 campaign strategy, ” he said.

Gov. Ambode had said he was committed to the well-being of Lagos residents when he inaugurated the Abule Egba bridges on May 17, 2017.

The governor said that all roads affected in the course of the construction of the bridges had been awarded for rehabilitation, while a shopping mall would also be constructed at Oke-Odo Market, Abule Egba, to boost economic activities in the axis. 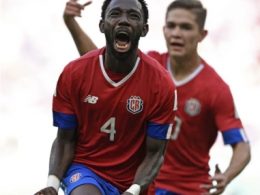 Costa Rica stunned Japan 1-0 thanks to a late goal at the World Cup on Sunday to blow Group E wide open and hand a potential lifeline to Germany.
byTayo Aderinola
No comments

Senator Bola Tinubu, the National leader of the All Progressives Congress (APC), has called on the Federal Government to invest massively on job creation to tackle insecurity and unemployment in the country.
byLateef Idris
No comments 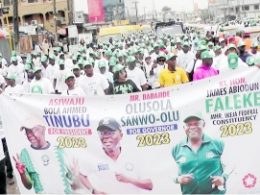 It was a massive turnout on Saturday, 27th August 2022, as the Youths in Ikeja defy the rain and participated in the much-awaited 100,000-Man-Walk for Tinubu/Sanwoolu/Faleke, in preparedness for next year's general elections.
byTayo Aderinola
1 share
1
0
0
No comments 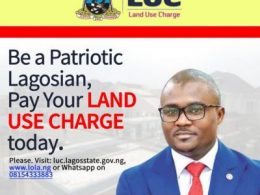 Lagos State Ministry of Finance has announced a 15% discount on all Land Use Charge (LUC) bills paid within 30 days after receipt of the Bill.
byLateef Idris
No comments