The council boss has vowed to prosecute offenders related to environment law.

This was contained in a press release issued by the Chief Press secretary to the Chairman, Oseni Owolabi Ajimomuya.

The chairman noted that residents should take the issue of their environment seriously as it tells directly on their health and wellbeing.

Salawu stated this recently while receiving the reports of drainage clearing as supervised by his Special Adviser on the Environment, Comrade Rotimi Oluyede. Plastic waste were evacuated from the Bajulaiye-Akoka axis of the System 2 Canal in Somolu by Recycling-Points, a LAWMA Accredited Agent.

According to Hon. Abdul Hamed Salawu, the local and state governments have spent huge sums of funds and resources in clearing the drainage systems and canals prior to the rainfall season.

“To make sure our areas are flood free and our people are safe alongside  their properties during the raining season, we expended so much funds in clearing the drainages on a monthly basis since January in preparation for the heavy raining season”, the Mayor said.

The Executive Chairman of Somolu charge residents of the council to desist from illegal activities which can block water ways, drainages and canal as they will eventually cause environmental hazards which destroys properties and could be fatal most times.

The Head, Environmental Health Services Department, Sanitarian Bolade Adekunle said the Prosecutor of Somolu Local Government, Sanitarian Omosalewa Ogunmodede is working with many volunteer residents who had signify their interest to be informants to the law enforcement agencies which will help the local government to prosecute the environmental defaulters.

Among other offences which the residents are being warned against included opening of septic tank into drainage, dumping of refuse into  drainages, indiscriminate dumping of refuse and leftovers by unhygienic food sellers to the public.

Many drainages are cleared recently in Somolu, according to the Mayor, the local government won’t take it easy with environmental defaulters as the Lagos State Environmental Laws won’t be handled with levity.

Sanwo-Olu at Davos, reassures investors Lagos is ready for investments

The governorship candidate of the All Progressives Congress in Lagos State, Babajide Sanwo-Olu, on Tuesday, reassured investors at…
byTayo Aderinola
No comments 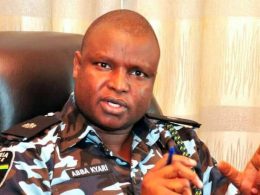