63% of Nigerians are multidimensionally poor – Buhari

President Muhammadu Buhari says about 63 percent of people in Nigeria are multidimensionally poor.

President Muhammadu Buhari says about 63 percent of people in Nigeria are multidimensionally poor.

Buhari said this at the inauguration of the 2022 Nigeria Multidimensional Poverty Index (MPI) Survey Report on Thursday in Abuja.

The report was released organised by the National Bureau of Statistics (NBS).

Represented by his Chief of Staff, Ibrahim Gambari, the president said multidimensional poverty was higher in the rural areas compared to the urban areas.

“This multidimensional way of understanding poverty has been helpful in highlighting beyond monetary/income-based poverty measurements, the stark realities of poverty in each state and across the 109 Senatorial districts.

This is according to the 2018/19 national monetary poverty line.

“However, 63 per cent are multidimensionally poor according to the 2022 MPI report.

He said that according to the report, two thirds that is 67.5 per cent of children aged between 0 to 17 are poor and 51 per cent of all poor people are children.

“The Federal Executive Council also just approved an Executive Bill to be sent to the National Assembly on the legal framework for the National Social Investment Programme.

” Hence, we have been intentional with our plan to lift 100 million people out of poverty within 10 years, in line with the objectives of the Sustainable Development Goals (SDGs)and the Africa Agenda 2063.

“We are happy that the MPI will serve as both a measurement and policy tool to monitor our progress at achieving these goals. ”

The president urged governors, policymakers, academics, private sector, the media, and the public, to engage with the results of the survey and find ways of utilising the findings to support the development in their respective areas.

“Together, we can work to eradicate extreme poverty in Nigeria, ensuring that we leave no one behind.”

Prince Semiu Adeniran, the Statistician-General of the Federation, said the MPI was one of the largest surveys to be undertaken by the NBS with a sample size of 56,610 households across 36 states and the Federal Capital Territory.

“Unlike the Global MPI which uses three dimensions (Health, Education and Living Standards), we added a fourth dimension, Work and Shocks in the 2022 MPI Survey.

” This fourth dimension as well as other added variables such as food security, water reliability, underemployment, security shocks and school lag, were all added to reflect the current realities and priorities in Nigeria.

“The Survey also has a linked Child MPI. This Child MPI extends the Nigeria MPI to include appropriate indicators for children under five, by adding a fifth dimension of child survival and development.

“While it does not offer individual-level data, it uncovers additional children who according to the extra dimension should qualify as multidimensionally poor.

Adeniran said the NBS computed and used both the monetary and multidimensional measures of poverty.

He said the monetary measurement of poverty which usually records a lower rate, makes use of consumption expenditure as a means of determining the level of poverty.

The MPI approach uses deprivations in basic amenities as a means of determining the level of poverty.

“Both measures, however, are needed to present a more holistic picture of poverty, and better inform policies intended to address the needs and deprivations faced by poor populations.

” This report, therefore, provides an updated estimate on the population of people who are multidimensionally poor in addition to being in monetary poverty, ” he said.

The United Nations Resident Coordinator, Matthias Schmale, in his remarks, said one key takeaway from the report was that poverty was a nationwide problem in Nigeria and its nature differed from state to state.

“Therefore, intervention should be tailored to the deprivation profile of each state which will make our intervention and support more efficient, ” he said.

Schmale said another priority area for the EU was education, and it was the union’s priority to support the government of Nigeria to ensure learning for all children, especially the poor.

The News Agency of Nigeria (NAN) reports that the survey was a collaborative effort between the NBS, the National Social Safety-Nets Coordinating Office, the United Nations Development Programme, UNICEF and the Oxford Poverty and Human Development Initiative. 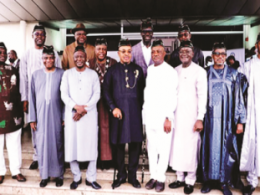 Governors of the Peoples Democratic Party (PDP) have arrived in Rivers State for their meeting slated for Monday.
byTayo Aderinola
No comments

Coronavirus: FG, NMA stand off over Chinese experts not in Nigeria’s interest – Foundation