The Nigeria Police Force said today (Wednesday) Senate President Bukola Saraki is still under investigation, as it also announced the arrest of  two out of the three  suspects mentioned by one of the gang leaders of  the Offa bank robbery.

In an update, the police said the two men arrested were named by the overall gang leader, Ayoade Akinnibosun,  during the parade of suspects on 3 June.

The newly arrested men were identified as Alhaji Kehinde Gobiri, also known as Captain and  Alhaji Oba Shuaib Olododo a.k.a Jawando. The third wanted person, Alhaji Dona is still at large. Gobiri is 47 years old, while Olododo is 53 years old.

According to the police, the two men, all from Ilorin, Kwara state capital, have admitted to various crimes and criminalities that they had committed in Kwara Central Senatorial District under the guise of working as political thugs for the Senate President,  Bukola Saraki.

“They are currently under investigation and will be charged to court on completion of investigation”, police spokesman, Moshood Jimoh, said.

The five gang leaders and 17 principal suspects,  who the police said  admitted taking part in the Offa robbery on 5 April, were paraded on 3 June before the media. They were all accused of robbing six banks and attacking  the divisional police headquarters, killing 33 persons, including nine policemen.

Police, meanwhile, have continued to dig more links between the Senate President and all the accused as their investigations deepened.

“New revelations from further investigation into the matter show that all the five  gang leaders namely; Ayoade Akinnibosun, Ibukunle Ogunleye, Adeola Abraham, Salawudeen Azeez, Niyi Ogundiran have direct connection to the Senate President, Sen. Bukola Saraki as new pictures of one of the five  gang leaders when paraded by the Police early in the week was in ‘Aso Ebi’ (trouser) used during the Senate President daughter’s wedding.

“The Five (5) gang leaders further confessed during investigation that they are political thugs under the name Youth Liberation Movement a.k.a “Good Boys” . They admitted and confessed to have been sponsored with firearms, money and operational vehicles by the Senate President, Sen. Bukola Saraki and the Governor of Kwara State, Alh. Abdulfatah Ahmed. These confessions were made before the media and the public on the 3 of June, 2018. It is therefore, evidently clear that the Senate President, Sen. Bukola Saraki has case to answer.”

Despite the vote of no-confidence passed on the Inspector General of Police, Ibrahim Idris on Tuesday, the police said they will not be cowed or succumb to intimidation from any quarters in carrying out a thorough and discreet investigation into the Offa Bank Robbery.

The police said  significant successes have been recorded and that the  investigation will be driven to a logical conclusion.

*What the five gang leaders confessed to the Police:

* Ayoade Akinnibosun a.k.a AY ‘M’ 37Yrs – Gang Leader From Oro, Irepodun LGA, Kwara State. Confessed to have coordinated the Bank Robbery and the killing of Thirty Three (33) innocent persons during the bank robbery.

The other 17 suspects volunteered confessional statements admitting their active participation in the robbery.

Gbajabiamila to Nigerians: “Join the party of progress”

The Speaker, House of Representatives, Rep. Femi Gbajabiamila, has urged Nigerians to use the opportunity of the ongoing All Progressives Congress (APC) registration and re-validation exercise to join the party.
byTayo Aderinola
No comments

The suspended acting Chairman of the Economic and Financial Crimes Commission (EFCC), Ibrahim Magu, has allegedly been accused…
byTayo Aderinola
No comments

Nobel Laureate, Prof Wole Soyinka, has warned the Federal Government against the proposed establishment of Ruga settlements across…
byTayo Aderinola
No comments 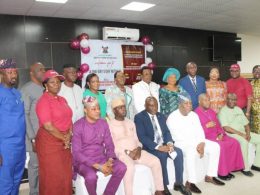 The Commissioner for Home Affairs, Prince Anofiu Olanrewaju Elegushi, has charged members of the newly inaugurated Board of the Lagos State Christian Pilgrims Welfare Board (CPWB) to sustain efficient standards in the discharge of their duties.
byLateef Idris
No comments