When his name was announced as the new chairman of the Economic and Financial Crimes Commission (Subject to Senate confirmation) in a short statement from the State House Tuesday monrning, not many Nigerians knew who Abdulrasheed Bawa was. Here are however 10 things to know about the EFCC chair designate.

When his name was announced as the new chairman of the Economic and Financial Crimes Commission (Subject to Senate confirmation) in a short statement from the State House Tuesday monrning, not many Nigerians knew who Abdulrasheed Bawa was. Here are however 10 things to know about the EFCC chair designate.

3. Bawa obtained a Bachelor of Science Degree in Economics and Masters in International Affairs and Diplomacy from Usmanu Danfodio University Sokoto in 2001 and 2012 respectively.

8. He is the head of EFCC team investigating former Minister of Petroleum Resources Mrs. Diezani Alison-Madueke and associates (From October 2015 till date) which recovered millions of dollars worth of properties in Nigeria, UK, USA, and UAE, including 92 properties in Nigeria.

9. He was involved in investigation and prosecution of several other notable cases such as Atlantic Energy Group (2014-2015) where millions of dollars worth of properties in Nigeria, UK, USA, Switzerland, UAE and Canada were recovered; Crude Oil Swaps and OPA (2014-2015), were several billions of Naira were recovered; and the Petroluem Subsidy Fraud (2012-2015) where fraud of about N70billion was identified, several billions of Naira recovered and prosecuted several companies.

10. He is a recipient of Economic and Financial Crimes Commission Merit Award (2020); US Federal Bureau of Investigation (U.S. Department of Justice) Recognition Award (2019), for facilitating the collaboration between EFCC and the FBI, which resulted in a mutual fight against Economic and Financial Crimes on an international scale; and US Federal Bureau of Investigation (Criminal Investigative Division) Appreciation (2019) in recognition of his support and contribution in FBI’s Operation rewired, which resulted in nearly 209 arrests worldwide.

In response to series of letters and appeal from Oshodi-Isolo Local Government Administration on the need for a collaboration with the state government to rescue the community on deplorable condition of some major roads within the local government which are beyond the capacity of the council authority.
byTayo Aderinola 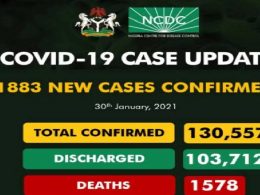 The Nigeria Centre for Disease Control (NCDC) has registered 1,883 new infections of the Coronavirus (COVID-19) bringing the…
byTayo Aderinola