Participants at the just concluded Lagos 9th International Climate Change Summit have recommended that Lagos State Government should engage the Federal Government to develop a mechanism for accessing Green Fund from international organisations towards addressing the effect of Climate Change in the State.

Participants at the just concluded Lagos 9th International Climate Change Summit have recommended that Lagos State Government should engage the Federal Government to develop a mechanism for accessing Green Fund from international organisations towards addressing the effect of Climate Change in the State.

A communiqué issued at the end of the two-day summit, on Wednesday, suggested that Lagos State Government should also organise dialogue sessions with the Private Sector to map out strategies for climate finance in the State while considering the launch of the Green Climate Fund.

It added that governments at all levels – Federal, State and Local – should put in place funding mechanisms for easy access to renewable energy, considering the huge energy requirements for the State’s teeming population, just as it implored the State to incorporate resilience to long term impacts of climate change and extreme weather events.

According to the communiqué, there is a need to include resilience strategies in the planning and implementation of Lagos Infrastructure Development Initiatives while embracing the integration of the value of natural capital into Urban Planning and Development.

“The State should consider the adoption of the G20 Quality Infrastructure Investment (QII) Principles that enable Cities to create a strong foundation for achieving sustainable, resilient and inclusive growth. The State should also integrate considerations for green building and energy efficiency in the domestication of the National Building Code”, the statement stated.

In the agricultural sector, according to the report, Lagos State was requested to promote Climate Smart Agriculture (CSA) as a panacea for addressing Climate Change induced food insecurity and put in place an Action Plan with a robust Legal Framework to ensure food security in the State.

“The State Government, through its various Youth-focused programmes, should create the required platform for the involvement of youths in the implementation of Climate Action Plans in the State and accelerate efforts at issuing its first green bond to facilitate investment in climate change response”, the report said.

The communiqué urged the private sector, particularly Oando Clean Energy, to support Lagos State in establishing and financing a training institute for the development of technical human power for the green job economy.

Recommending that the State should maximise the use of its waterways for mass transportation to reduce greenhouse gas emissions, the statement emphasised the need to do more in infrastructure development to have dedicated greener corridors.

The International Climate Change Summit is an annual event organised by the Lagos State Government, through the Ministry of the Environment and Water Resources, to address climate change issues that threaten human existence. 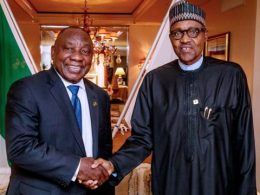 President Muhammadu Buhari on Wednesday in Abuja called for a stronger emphasis on people-to-people relations between South Africa and Nigeria to evolve a bond that will be of benefit to both countries and the entire African continent.
byTayo Aderinola
No comments 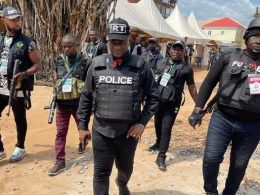 Security Operatives of the Inspector General of Police Intelligence Response Team (IRT) Unit have successfully apprehended a suspect, Besida Rukkay, who is known to be a fraudster and an impersonator.
byTayo Aderinola
No comments

The Lagos State Commissioner for Health, Prof. Akin Abayomi, has reassured Lagosians on safety of the COVID-19 vaccine, just as he maintained that the Lagos State Government will ensure that residents get vaccinated.
byLateef Idris
No comments