England took everything that has been said about them in the build up to the World Cup and trashed it in the opening game.

England took everything that has been said about them in the build-up to the World Cup and trashed it in the opening game.

Six goals not only equalled the most England have ever managed in a finals game, it was the perfect riposte to anybody that has been moaning Gareth Southgate’s team are not entertaining enough.

And all without Harry Kane hitting the back of the net – the one player we have to rely on for our goals, or so it was said.

Instead, it was Jude Bellingham who set up on his way, a player who supposedly has not found his right position for England but seemed to take on plenty of wrong ones as far as Iran was concerned in his man-of-the-match display.

Bukayo Saka proved he is absolutely deadly from 12 yards out, expunging all memories of last year’s Euro 2020 final shootout with an accomplished open-play finish from similar distance.

And even Raheem Sterling proved that he can relax into a World Cup finals with his first ever goal in his sixth game on such as stage. 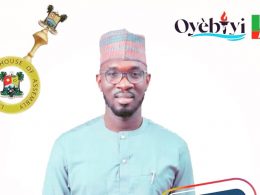 Barrister Oyebiyi Ladapo, an aspirant of the All Progressives Congress, for the Lagos State House of Assembly, Ikeja Constituency I, in a chat with yours sincerely, Tayo Aderinola on the Lagos Panorama Teleview interview segment, Facing Facts, elucidated on reasons, inspiration and plans for aspiring to become the state lawmaker for the Ikeja Constituency I, the APC National Leader and Presidential hopeful, Asiwaju Bola Ahmed Tinubu’s constituency.
byTayo Aderinola
No comments