Rivers State Governor Nyesom Wike has inaugurated the first batch of 100, 000 special assistants he recently appointed to take charge of political units ahead of the 2023 general elections.

Rivers State Governor Nyesom Wike has inaugurated the first batch of 100, 000 special assistants he recently appointed to take charge of political units ahead of the 2023 general elections.

Those inaugurated by the Governor at the Adokiye Amiesimaka Stadium, Omagwa in Ikwerre Local Government Area of the State on Thursday were from the Rivers West and Rivers Southeast senatorial district of the State.
Wike congratulated them on their appointments to serve as his aides saying it was a privilege to have such opportunity in one of the most prestigious states in the federation.

He told them to work among their people, hear from them of what views they hold about his administration.

He asked them to gauge the mood to understand the feelings of the people in their political units concerning programmes and policies of his administration.

He said as special assistants, they were to collate those impressions and pass them on as feedback through the 319 Ward and 32 Constituency Liaison Officers recently appointed, who would eventually transmit same to his office.

Wike emphasised that they were the ones to determine the decision and direction that the state and the party would take politically in the days ahead.

He said: “This is a political period, hear from the people. What are they saying. So, you’ll be able to advise the governor, so I will know what decision to take. It is you who will determine what decision the people of Rivers State will take at the end of the day.”

House of Reps defaults in donating to coronavirus fund

Members of the House of Representatives have defaulted in contributing their March salaries in aid of COVID-19 fund.…
byTayo Aderinola
No comments

CAC headquarters in Abuja goes up in flames

The Corporate Affairs Commission (CAC) headquarters in Maitama, Abuja has been gutted by fire. Firefighters were seen battling…
byTayo Aderinola
No comments 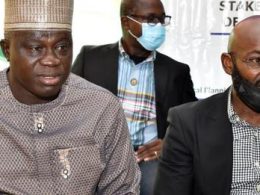 The Lagos State Government has declared its readiness to commence the upgrade of Amoo/Adalemo Road in Orile Agege Local Council Development Area of the State.
byTayo Aderinola
No comments