Chief Malcolm Omirhobo, a lawyer and human rights activist, created some drama at the Supreme Court Thursday, appearing in a mix of the lawyer’s traditional attire and the outfit of devotees of the sea goddess, Olokun.

Chief Malcolm Omirhobo, a lawyer and human rights activist, created some drama at the Supreme Court Thursday, appearing in a mix of the lawyer’s traditional attire and the outfit of devotees of the sea goddess, Olokun.

The Delta State indigene added feathers to his lawyer’s wig, to complete his startling dressing.

When journalists pestered him with questions, the lawyer responded that it was a protest because of the Supreme Court’s recent verdict on the hijab.

He said since the apex court legalised the wearing of hijab in schools and public places in Nigeria, why should he, an ‘olokun’ devotee not be free to wear his goddess’ attire to court, a public place?

He added: “I am very grateful to the Supreme Court for taking a resounding decision that promotes section 38 of the 1999 constitution.

“Henceforth, this is how I would be dressing as I am an adherer to the Olokun river goddess injunctions.

“The decision stresses the importance of Section 38 of the 1999 constitution that says all religions are free to wear their religious costume in schools and public spaces.

“After all, Nigeria is a multi-religious country. So anyone that tries to stop me from dressing like this is infringing on my constitutional rights,”

He urged students in Nigeria to follow his example.

“The pronouncement of the apex court is that we can bring religion into the public space and I have just demonstrated the same by joining this proceeding dressed as an olokun devotee,” Omirhobo stated further.

President Muhammadu Buhari has finally forwarded the list of ministerial nominees to Senate for confirmation. There are 43…
byTayo Aderinola
No comments 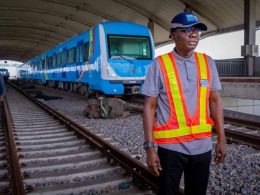 Lagos State Governor, Mr. Babajide Sanwo-Olu, on Sunday reassured the residents that the State Government is on track with its efforts to complete works on both the Blue and Red lines rail projects, which are intra-city, to strengthen the intermodal transportation system.
byTayo Aderinola
No comments 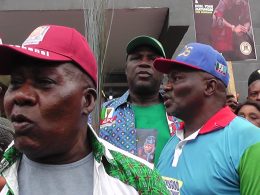 Coronavirus: Fight against coronavirus should be collective responsibility of all – Yinka Quadri

Veteran Actor, Yinka Quadri, has urged Nigerians to take the fight against COVID-19 as a collective responsibility of…
byTayo Aderinola
8 shares
8
0
0
No comments