Justice Must Prevail Party (JMPP) on Thursday said if elected into power in 2019, it would construct perimeter fence around Nigeria and change the name of the country and the currency.

Acting National Chairman of the Party, Dr Olusegun Ijagbemi, revealed at a news conference in Abuja.

He said that the need to change the name of the country and its currency was divinely revealed to the leadership of the party, adding the changes were important if Nigeria must make progress.

According to Ijagbemi, the 14th pillar of our party is to change the name of Nigeria to Pisonia and its currency from Naira to Pison.

“It is a miracle that the leadership of this party got a wind of how the entire African nation is being impoverished with their currency.

“There are people outside Nigeria printing our currency and they have agents among us, including our political leaders.

“They are printing money and they have agents in CBN and throughout Africa. We brought this information to Nigeria that they are destroying our economy,’’ he said.

The chairman added that about six months ago, the CBN revealed to the National Assembly that more than 20 per cent of Nigeria’s currency was fake.

Ijagbemi said that promoting citizens’ welfare and security of lives and property would be one of the major concerns of the party, if elected.

He said that the party would use technology to monitor the country’s borders and that security forces would be highly motivated.

“This party is going to fence Nigeria and create only regulated route for people to come in and go out of the country.

“You can no longer move boys or girls across the border with trailer and then say you have captured or recovered them.

“There will be no need for people sleeping with their hearts panting. You cannot just come into the country, invade it and steal our oil.’’

Ijagbemi stated that JMPP government would strengthen the immigration laws, and that border control would be exercised maximally.

He said that citizenship laws would also be reviewed to meet the exigencies of current happenings in the world.

Ijagbemi decried the level of unemployment in the country, saying it was unacceptable, “considering the fact that the nation was reputed as one of the richest in the world in human and natural resources’’.

To address the challenge, he said that JMPP would equip Technical Colleges and Polytechnics to provide high-level manpower to form the backbone of technological and industrial development.

“The party will also encourage the formation of new industries in line with modern technological trends using the products of the revamped technical schools and polytechnics.

“Skills development centres will be established in all local government councils of the country.”

He added that JMPP government would ensure that international agreements negotiated and entered into by the Federal Government were in tandem with the interests of Nigerians. 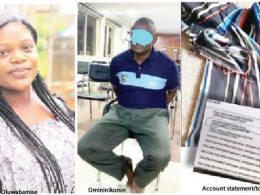 Infamous Lagos BRT bus driver Andrew Nice Omininikoron, arrested in connection with the murder of a passenger, Oluwabamise Ayankole, has been accused by another female passenger of rape.
byTayo Aderinola
No comments