We are committed to double-digit GDP, Tinubu assures the business community

The All Progressives Congress (APC), Presidential Candidate, Asiwaju Bola Ahmed Tinubu has reassured Nigerians of his resolve to grow a double-digit figure in the Gross Domestic Product (GDP) economy if elected.

The All Progressives Congress (APC), Presidential Candidate, Asiwaju Bola Ahmed Tinubu has reassured Nigerians of his resolve to grow a double-digit figure in the Gross Domestic Product (GDP) economy if elected.

Last month at the 7th edition of the Kaduna Economic and Investment Summit (KadInvest 7.0), Tinubu promised to build an economy that will achieve double-digit growth.

He further reinforced this on Tuesday during a town hall meeting with the Business Community and Organised Private Sector at Victoria Island, Lagos.

Laying down his action plan before the business leaders, Tinubu, a former governor of Lagos State traced the path of the state’s economic growth under his administration and affirmed that having achieved similar economic success as Lagos State governor, he can repeat the same in the country as president.

He said: “Lagos is an appropriate venue for this meeting. You may have heard that I was once the governor of this dynamic economic force. However, may I remind you that Lagos was a different story when I first entered the office.

“My team and I developed a blueprint, a master plan, for Lagos. I can say that plan has been largely successful.

“We turned this state into a safer, more prosperous place where people can go about any legitimate vocation or venture regardless of ethnicity, religion, region or prior social station.

“We did more than open Lagos for business. We opened the door for all Nigerians to join and experience the decent things progressive democratic governance can bring.

“We were not perfect but we did a lot. In doing so, we worked for hand in hand with the business community as partners sharing the same goals of prosperity and renewed hope.

“Well, as you might have heard at some point recently, I now stand before you, seeking a bigger yet similar job.”

He then threw a challenge to the business community to join hands with him to achieve his dream of a more prosperous economy, insisting that a viable economy requires collaboration between the political and business communities.

He empathised that the nation needed to move from dependence on exporting its raw materials to nations who sell the finished products to us at exorbitant prices to one that refines its raw materials for upward export itself. 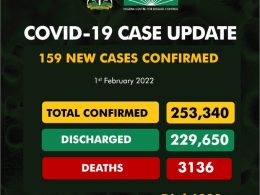 On the 1st of January 2022, 159 new confirmed cases were recorded in Nigeria
byLateef Idris
No comments 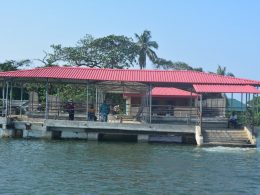 The Lagos State Government has disclosed plans to commission about 15 new jetties before the end of the 2021 calendar year.
byLateef Idris
No comments 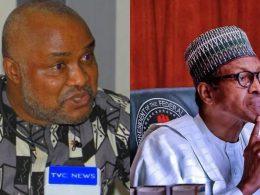 Human Rights Writers Association of Nigeria, HURIWA, has warned President Muhammadu Buhari over the behaviour of some of his ministers.
byLateef Idris
No comments