Embattled former chairman of the Pension Reform Task Team, Mr Abdulrasheed Maina, is back in the news in an apparent bid to stir up more controversy.

Speaking in an exclusive interview obtained by Channels Television, Maina is asking the Federal Government to pay him five per cent of the N1.6 trillion pension fund he and his team recovered for the government.

According to him, the demand is based on an agreement he had with the Head of Service before taking up the job.

He made his demand in a new video exclusively obtained by Channels Television, and released on Wednesday, December 6, 2017.

In the video, Maina, who’s currently on the run from law enforcement agencies in the country, continued to maintain his innocence on the corruption claims against him.

“Then, a small unit under the Ministry will come and start fighting me for N2.1bn.

“Now, I want the federal government to pay me the 5% of N1.6 trillion as reward for the tip I gave them for the recovered loot. Remember, I gave the tip when I was not in office.

“So, I want them to subtract the N2.1bn from the N80bn due to me for blowing the whistle on the recovered money and give me the balance.”

In October, Maina was recalled and promoted to head the Ministry of Interior’s human resource department despite pending corruption charges against him.

This was after he was dismissed by the Federal Civil Service Commission in 2013 following a recommendation by the Office of the Head of Service.

In 2015, Maina was charged alongside former Head of Service, Steve Oronsaye, Osarenkhoe Afe and Fredrick Hamilton Global Services Limited before a Federal High Court on a 24-count charge bordering on procurement fraud and obtaining by false pretence through the award of fraudulent biometric contracts.

After he was declared wanted over an alleged N2 billion pension fraud, he fled abroad to the United Arab Emirates (UAE), evading the capture of the Economic and Financial Crimes Commission (EFCC).

Watch the video below:

Buhari appoints Magnus Abe, Akinyelure, 4 others into new Board of NNPC

President Muhammadu Buhari on Saturday approved the reconstitution of the Board of the Nigerian National Petroleum Corporation (NNPC).…
byTayo Aderinola
No comments 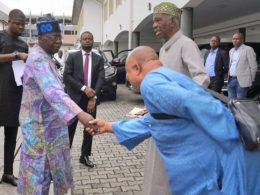 Leader of the Peoples Democratic Party in Lagos State Chief Bode George has suffered a big political blow as his longstanding ally and media aide dumped him for Asiwaju Bola Ahmed Tinubu’s All Progressives Congress.
byLateef Idris
1 share
1
0
0
No comments 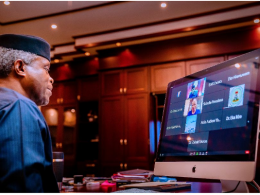 US-Africa relations should be based on fairness, Economic prosperity – Osinbajo

Vice President Yemi Osinbajo said a reviewed partnership between Africa and the United States should be one that helps to improve human security, to avert pandemics, or indeed to tackle the crises caused by climate change.
byLateef Idris
9 shares
9
0
0
No comments