Results have been released for most states while other states are still tallying votes to determine winners of the election which was held on November 8.

In the wake of the development, President Muhammadu Buhari sent his

“Restating his unflinching support for every Nigerian excelling at home and abroad, President Buhari believes that compatriots who succeed in good causes are assets to the nation and the continent, noting that their contributions will always be remembered and celebrated,” presidential aide Femi Adesina said in a statement on Wednesday.

Below are some of the Nigerians that have been declared winners in the election:

He won for Georgia State Representative in District 110.

He was elected as the Georgia State Representative, District 43.

She won her seat as Minnesota State Representative in District 59B 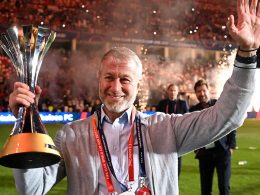 Why Chelsea FC Owner, Roman Abramovich, is ‘Effectively Barred From Living in Britain’

“Following some of the reports in The Sun and other newspapers today. I’ve got hold of a leaked document from 2019 from the Home Office, which says, in relation to Mr. Abramovich.”
byLateef Idris
No comments