The United Nations refugees agency has criticised Nigeria for breaching international treaties after forcefully deporting a Cameroonian Anglophone separatist and his supporters.

UNHCR said that most of those handed over to Yaoundé authorities had applied for asylum in Nigeria.

Julius Ayuk Tabe and 46 others were extradited at Cameroon’s request on January 26.

Cameroon says the 47 are “terrorists” and will “tried for their crimes”.

UNHCR said it learned “with great concern of the forced return” and that the extradition is “in violation of the principle of non-refoulement, which constitutes the cornerstone of international refugee law.”

Non-refoulement is the practice of not forcing refugees or asylum seekers to return to a country where they could be subjected to persecution.

“The returns were carried out despite UNHCR’s efforts and engagement with the authorities,” the agency said in a statement.

Mr Tabe is the leader of a separatist movement that declared independence of Cameroon’s two English speaking regions last October. He was arrested in the Nigerian capital Abuja on January 5.

Tensions have been mounting in Cameroon’s Northwest and Southwest regions since the secessionist calls due to what residents say is marginalisation by the predominantly Francophone government.

President Paul Biya’s administration, which is strongly opposed to the secession, has imposed curfews and increased soldiers in the two regions and conducted raids.

Scores of people have been killed in clashes between government troops and protesters, and an estimated 30,000 people have fled to Nigeria.

“UNHCR reminds Nigeria of its obligations under international and Nigerian law, and urges the Nigerian Government to refrain from forcible returns of Cameroonian asylum-seekers back to their country of origin,” it said.

It also urged the Cameroonian government to treat the detained persons in accordance with human rights law and standards.

On Friday, the government in a communiqué read by the state broadcaster, said Mr Tabe and the other deportees from Nigeria were in good health at the Yaoundé police cell in the capital.

The police in Lagos on Tuesday paraded 520 suspects arrested for their roles in last week’s violence. Six…
byTayo Aderinola
No comments

The first jab of AstraZeneca Coronavirus (COVID-19) vaccine has been administered in Lagos State. The Incident Commander in the State, Governor Babajide Sanwo-Olu, kicked off the vaccine rollout programme after he got the first jab of the serum supplied by the Federal Government.
byLateef Idris
No comments 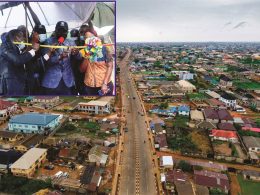 Pains associated with vehicular movement around Ijede town in Ikorodu area of Lagos State are now things of the past, as Governor Babajide Sanwo-Olu commissioned the first phase of the newly constructed Ijede Road on Wednesday.
byLateef Idris
13 shares
13
0
0
No comments