The UEFA Men’s Player Of The Year Goes To C. Ronaldo, Thanks Teammates On Instagram

Real Madrid Star, Cristiano Ronaldo has won the UEFA Men’s Player of the Year for a second consecutive season.

The sensational attacker with the CR7 trademark saw off competition from Barcelona star Lionel Messi and Juventus goalkeeper Gianluigi Buffon to claim the award for the third time overall.

Previous winners of the award include Messi and Barca team-mate Andres Iniesta, who claimed the prize in the 2011-12 campaign ahead of the Argentina international in second.

He wrote on his Instagram handle: “Thank you to my teammates, coaches and staff who helped me win this trophy again. I dedicate this to my family, friends and fans. This is also yours!”

A two-storey building under construction in a Lagos community collapsed on Tuesday, killing its owner, identified as Pastor Daniel Obasi.
byTayo Aderinola
No comments 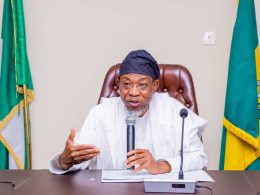 The Federal Government on Friday described as false and untrue, media reports that there are threats of a possible attack on Abuja by foreign terrorists during this festive season.
byTayo Aderinola
No comments