The political demise of the Obanikoros: A tale of father and sons

Popularly called KORO, Senator Obanikoro is one of the few Nigerians who have been favored politically .First as a chieftain of the progressive ALLIANCE FOR DEMOCRACY and later a   chieftain of the People’s Democratic Party(PDP), Born in the year 1954 into the prominent Obanikoro family. Despite the prominence of his LARGE family, KORO wasn’t born rich. His immediate family was poor, his dad was a nobody in the context of social status, his beloved mom was a pepper seller in Lagos Island, who assumed the role of bread winner at the demise of her husband. During his secondary school days, KORO did several menial jobs just to support his education, among these include working as a Newspaper Vendor early morning before going to School, hawking benches in the afternoon/evening after school etc. After his secondary education, KORO worked as a Clerk with Lagos Health Management Board, then he moved to Union Bank at 131 Broad Street. It was while working at the Bank that KORO got admission/visa to study in the United States. He successfully completed his Bachelor in Public Administration as well as a Master Degree. In 1989 KORO returned to Nigeria to work  in different capacities in the public service including as Caretaker Committee Chairman, Surulere LG. KORO contested and won chairmanship election of Lagos Island LG, a position he held till 1995.  KORO held other positions, he was appointed Commissioner by Bola Tinubu, a position he held till 2003 when he got elected into the senate to represent Lagos Central Senatorial District. in the Senate.

Ambition to be governor was pursued by KORO till he exited the progressives’ fold for PDP  where he got the governorship ticket to contest the 2007 election but he lost and was compensated  to  serve as Nigeria’s Ambassador to Ghana 2008-2012, and consequently he became  Minister of State for Defense and Foreign Affairs,

KORO is happily Married to his wife whom he met while in secondary school. KORO have children from his wife, prominent among them are Honorable Olajide Obanikoro, Chairman who contested to be  Ikoyi/Obalende Local Govt, and Lagos assembly as a  member of the People’s Democratic Party. His brother Gbolahan Obanikoro.

As things stand now, Senator Musiliu Obanikoro  and  sons   are   embattled for political demise by scandals. Currently Senator Musiliu Obanikoro  is AWOL with his sons courtesy DASUKIGATE and EKITIGATEM. The  Obanikoros  are gradually fading out of relevance in Lagos state and national scheme of things. Babajide and Gbolahan Obanikoro, were on the radar of the Economic and Financial Crimes Commission after about N4.75billion was traced from the office of former National Security Adviser Sambo Dasuki to a company, Sylvan McNamara Limited, in which the two men have interest 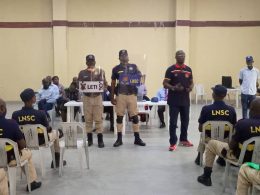 The General Manager of the Lagos State Neighbourhood Safety Corps, Prince Ifalade Oyekan, has charged officers to increase their efforts towards improving the performance of the corps in their respective communities.,
byLateef Idris
No comments 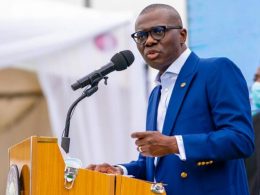 Ahead of President Muhammadu Buhari’s campaign tour to Lagos State on Saturday, the state government on Wednesday announced…
byTayo Aderinola
No comments