An SS3 student was shot dead during a clash between security operatives of the Joint Border Patrol Team (JBPT) and suspected rice smugglers at Irosu village near Badagry on Saturday.

An SS3 student was shot dead during a clash between security operatives of the Joint Border Patrol Team (JBPT) and suspected rice smugglers at Irosu village near Badagry on Saturday.

It was gathered that Alade Oba (18), was hit by stray bullet and died on the spot during the clash with JBPT comprising Customs, Army and Immigration.

The JBPT, which was established in the aftermath of the border closure of August 2019, is yet to be disbanded.

It was gathered that the JBPT were on routine patrol at Irosu community near Sawa check point around Owode-Apa border post in search of smuggled foreign rice, following a tip off.

Some aggrieved youths, however, confronted the operatives, vowing that on no account should any security agent be allowed to enter their domain to carry out the operation.

“However, in the ensuing fracas, the operatives started shooting into the air.

“In the process, one Alade Oba, an SSS3 student of Kankon Secondary School, was hit by a stray bullet and died on the spot.

“This resulted into serious protest by the youths who mobilized and burn tyres, demanding for the release of Oba’s corpse,” a source at the scene told NAN.

NAN reports that the unrest prompted the Commanding Officer of 243 Recce Battalion, Ibereko, Badagry, Col. Nicholas Rume, to lead his men to the area to contain what could have degenerated into further loss of lives.

The deceased corpse was later released to the family for burial while soldiers were deployed to maintain peace in the area.

Mr David Aladeotan, Chairman, National Youth Council of Nigeria (NYCN) in Badagry West, said the deceased was on his way from coconut farm when he was hit by stray bullet and died immediately.

“Despite the fact that elders and leaders of the community assured them that there was no smuggled rice in the village, they continued searching, but they did not get anything.

“So, they deliberately picked some motorcycles parked by some people; this resulted into confrontation between the officials and the motorcycle riders, when they were trying to get their bikes back.

“The riders overpowered them and collected their motorcycles back, this made the JBPT to reinforce, blocked the roads, restricting people’s movement.

“Consequently, they started shooting sporadically into the air and around.

“One of the victims is a SS3 student of Kankon Senior Secondary School, who died on the spot, while the other hit on the leg was receiving treatment in hospital,” Aladeotan said.

According to the PRO, the security operatives were attacked by rice smugglers who were using bush paths in Irosu community.

“The officials of JPBT blocked the bush paths and apprehended some motorcycles being used for smuggling rice.

“The smugglers went to mobilise about 150 people to attack the officials of JBPT, throwing stones and using other weapons.

“It was when they made an attempt to burn one of the Hillux buses by the team that the officials were forced to shoot into the air to scare them away.

“It was during the shooting that a stray bullet hit one of the ring leaders.

“The allegation that the guy was coming from farm is a lie, he was among the smugglers and one of them,” he said.

Hussiain said that the situation had been brought under control, adding that normalcy had returned to the area.

The National Leader of the All Progressives Congress (APC), Asiwaju Bola Ahmed Tinubu, has lost his Chief Security…
byTayo Aderinola

The Lagos State Teaching Service Commission (TESCOM) has announced the intention of the Commission to recruit 1,000 teachers…
byTayo Aderinola 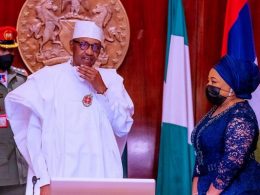 The Board of the Nigerian National Petroleum Company Limited was inaugurated by President Muhammadu Buhari last week. Two names were very prominent in the assemblage: Margery Chuba Okadigbo, the Chairman, and Constance Harry Marshall.
byLateef Idris 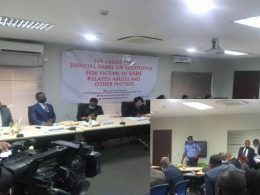 The Lagos State Judicial Panel investigating the Lekki Shooting of October 20, 2020, is currently hearing the evidence of the Assistant Commissioner of Police in charge of operations at the Lagos Command.
byLateef Idris