A soldier attached to 243 Recce Battalion Ibereko, Badagry, LCP Mahmud Sulaiman, turned the gun on himself after he shot dead a customs officer at Seme border on Wednesday.

A soldier attached to 243 Recce Battalion Ibereko, Badagry, LCP Mahmud Sulaiman, turned the gun on himself after he shot dead a customs officer at Seme border on Wednesday.

The News Agency of Nigeria (NAN) gathered that the incident occurred when the team leader was trying to retrieve the gun from Sulaiman following his strange behavior. “In the process of retrieving the cocked weapon from him, which he resisted, he accidentally fired a shot and the stray bullet hit one Inspector of Custom, C.N Walter.“The customs officer, who was attached to Seme Border Area Command, was rushed to Badagry General Hospital for treatment.

“But unfortunately, the customs officer died at about 6:40 a.m. on Thursday in the hospital.“Subsequently, Sulaiman also shot himself and died on the spot,” the source said.NAN gathered that the incident occurred at about 7:45 p.m. on Wednesday at Oloko checkpoint, Gbaji on Badagry-Seme expressway.

It was learnt that Sulaiman, who was recently redeployed to the Ibereko Battalion from the Theater of Operation in the North-East, had been behaving abnormally since assumption of duty in Badagry.“He always cock his AK 47 riflefully loaded with ammunition, an action that made his Team Leader to report the matter to the Commanding Officer of 243 Recce Battalion, Col. Nicholas Rume, where he was serving.“The commanding officer immediately ordered for the retrieval of the weapon from him,” he said.Contacted, the Customs Public Relations Officer in Seme border, Mr Abdulahi Hussiain, confirmed the incident, saying that the situation is under control.“It is true, it was an accident but the situation is under control now.“It is unfortunate the soldier committed suicide,” he said. 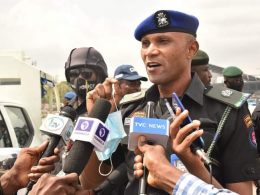 The Lagos State Environmental and Special Offences Enforcement Unit {Taskforce} has said that Motorists who have developed the habit and passion for driving against traffic (One-way) should be bold and courageous enough to face the Mobile Court.
byLateef Idris
No comments 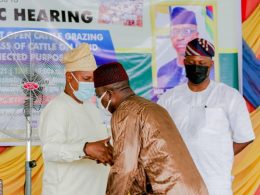 Why VAT law will be beneficial to Lagos – Obasa, residents speak at public hearing

The Speaker of the Lagos State House of Assembly, Rt. Hon. (Dr) Mudashiru Obasa, on Wednesday, said the proposed law on Value Added Tax (VAT) would help the state meet more of its developmental goals.
byTayo Aderinola
No comments 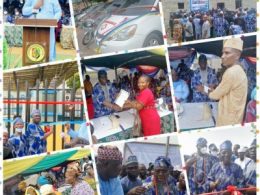 Hon. Ismail Monsuru Akinloye commemorates his first 100 Days in office after being sworn in on July 27, 2021 and pledging that if elected, he would bring a total transformation and great advancement to his community and the people he governs.
byLateef Idris
No comments 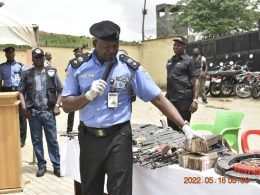 The Force Intelligence Bureau Special Tactical Squad (FIB-STS) operatives following directives from the Inspector-General of Police, IGP Usman Alkali Baba, to clampdown on the perpetrators of crimes and criminality, as well as cutting off their supply of arms, have successfully effected the arrest of 31 suspects connected with major violent crimes including Kidnapping, Culpable Homicide, Rape, Unlawful Possession of Firearms etc.
byTayo Aderinola
No comments