This came after the sack of Lawal Daura as Director-General, DSS, earlier on Tuesday by Osinbajo after the invasion of the National Assembly by the DSS.

This was confirmed by the Presidency on its twitter handle on Tuesday, saying “Matthew B. Seiyefa, the most senior Director in the Department of State Services (DSS), will act as Director-General until further notice.”

Today is definitely a Boxing day with great entertainment events, as Wizkid (Star Boy) and Kizz Daniel get…
byTayo Aderinola
No comments

The Lagos State Government has intesified the disinfection of major bus stops, parks and railings in the metropolis…
byTayo Aderinola
No comments 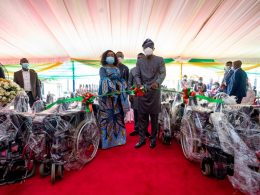 The Lagos State Government has set aside N500million for the empowerment of People Living With Disabilities (PLWDs), just as it has rescued and rehabilitated over 3000 beggars, destitute, mentally challenged people and children found on the streets of Lagos.
byLateef Idris
No comments