President of the Senate, Dr Bukola Saraki, says Nigerian Army’s branding of Indigenous People of Biafra (IPOB) as a terrorist organisation is unconstitutional.

Also unconstitutional, according to him, is the proscription of the group by the governors of South-East states.

Saraki, in a 10-point statement on Monday in Abuja, said the pronouncements by the governors and the military did not follow due process.

He said that such declarations would not take effect because the laws had made clear provisions for taking such actions.

“I am sure the President will do the needful by initiating the right process.

“This will go a long way in demonstrating to the world that we are a country that operates by laid down process under every circumstance.

“So, those who have been hammering on this point should maintain their cool,’’ he said.

While commending the military for their efforts in restoring peace to different parts of the country and sustaining the unity, he urged it to be guided by their training in the face of provocation.

According to Saraki, military training emphasises respect for human rights, even in war situations.

He added that given the nature of the situation in the South East, the military should have been hesitant in the use of force.

The president of the senate urged the executive not to over-stretch the military, adding that “we need to protect our military against dissipation of their fighting strength.

“This means we need to strengthen the police and equip them with the capacity to deal with civil crisis.

“That is why we in the National Assembly are already reviewing the Police Act and  looking at possibility of enabling other para-military agencies to help curb civil unrest and maintenance of law and order.’’

He said that the national assembly would embark on a fact-finding investigation aimed at determining what happened during the military exercise in the South-East.

Saraki said that it was to enable it sift the facts from the fiction and determine who did what, adding that all the facts were not yet known.

He assured Nigerians that there would be no cover-up, saying that all facts would be laid bare.

He called for calm and restraint by all Nigerians to provide the right solution to the current problem rather than worsening it.

The president of the senate further urged the people of the South-East to continue to maintain peace and tranquility and go about their lawful business.

He explained that if allowed to continue, the crisis would only expose innocent people to unwarranted danger.

He commended Nigerians in other parts of the country who had worked to ensure that the crisis did not spread beyond the South-East.

Saraki called for peace and stability to ensure that Nigerians, irrespective of religion, tribe and creed, remained protected and safe under the law.

“It is also important that commentators and purveyors of information on all media platforms should be conscious of the need, at all times, to maintain the unity of the country.

“Therefore, they must refrain from circulating information that has the potential for aggravating the crisis.

“We should all realise that Nigeria is all we have.

“It is therefore in our individual and collective interests not to stoke the fire of crisis and fan the embers of discord through the messages we spread.

“We must all protect and strengthen our country rather than contributing to her collapse and disintegration.

“We want to remind Nigerians that the reason for constitution review by the National Assembly was to enable us look into issues that are agitating the minds of Nigerians and creating tension among us.

“We have promised that the exercise will be continuous. We intend to keep that promise by further taking decisions that will strengthen and improve on our structures,’’ he said.

Saraki assured that the national assembly would on resumption, play its constitutional role by addressing all issues agitating the minds of Nigerians.

He called on political, religious and traditional leaders to continue to engage with the people on the need to maintain peace. 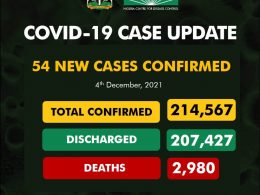 On the 4th of December 2021, 54 new confirmed cases were recorded in Nigeria
byLateef Idris
1 share
1
0
0
No comments 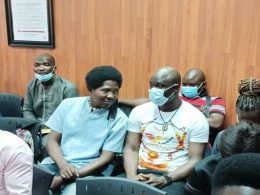 Lawyers for Nollywood actor Olanrewaju James alias Baba Ijesha have decided not to challenge the evidence of the lagos state government against him through a no-case submission as earlier indicated, in his alleged child defilement trial.
byTayo Aderinola
No comments 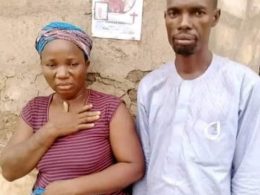 PHOTOS-NEWS: “We have left everything to God”, Say Deborah Yakubu’s Parents

llkinkThe parents of slain Sokoto student, Deborah Yakubu, have revealed that they have handed everything over to God.
byLateef Idris
1 share
1
0
0
No comments 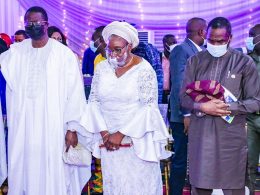