Lagos State Governor, Mr Babajide Sanwo-Olu on Friday acknowledged the role of women in building the home front and the nation, saying they have the capacity to solve myriad of challenges confronting the country.

Sanwo-Olu, who spoke while declaring open a three-day workshop on Protocol, Ethics and Security for members of the Committee of Wives of Lagos State Officials (COWLSO) held at Eko Hotels and Suites, Victoria Island, said women are multi-talented and naturally equipped with capability to undertake various things at the same time and get good result.

According to the Governor, “Even as we speak, this country has many challenges and because you are our mothers and you are our spouses, we believe that God has given you that capacity to be able to help us take this country to another level.

“We know that whilst we have many things to deal with, we can only do one thing at a time but women are multi-talented; you are multi-skilled; you are the ones that can breastfeed and be making pounded yam while also preparing Egusi soup and ensuring that kids go to school. Above all, you make money for the family and your businesses are still thriving.”

Sanwo-Olu said the country was at a state where everybody needed to come together and take the issue of safety and preventing disasters more seriously, especially in terms of avoiding acts that could have devastating consequences on the general public.

“Unfortunately in the period that we are, we have seen very harsh weather and when we started in December, we brought out notices and advocacy telling people in the markets to be careful because it is a season where we are going to have back to back fire incidents and so we have to be very careful.

“Don’t bring petrol to your shop; don’t bring petrol or diesel to your homes unnecessarily because it can cause combustion. The weather is very harsh, it can lead to fire outbreak. We thank God that we have a first-class response team in Lagos as each of those incidents were happening, we were able to curtail them. However there is a need for people to be more safety conscious,” he said.

The Governor commended security operatives for making the state stable security-wise despite the challenges in that regard, just as he urged women to take cleanliness of their homes and environments more seriously to tackle CoronaVirus and other diseases.

“Covid-19 (CoronaVirus) is a global health issue. We are thankful that God has also raised Lagos State up at this time again and as we speak, we have been able to curtail it and because we are also very prayerful, we believe that God will also help us because we don’t need such distraction in our country.

Besides, Sanwo-Olu commended the founding mothers of COWLSO and former First Ladies for the initiative of the Committee which had positively impacted the state, just as he lauded his wife, Dr. (Mrs.) Ibijoke Sanwo-Olu who is the current chairman of the Committee for raising the bar and holding the baton well to make the organization better, bigger and stronger.

He, however, urged participants at the workshop to participate fully in all the sessions, network properly and ensure that they have something positive to take back and reflect.

Also speaking, Deputy Governor, Dr Kadri Obafemi Hamzat equally commended the leadership of COWLSO for continuing the tradition of excellence of the organization, saying it was on record that the organization initiated many good things in the state including the Spelling Bee Competition, One Day Governor, the annual National Women Conference, among others.

He also spoke on the restriction of commercial motorcycle, popularly known as Okada and tricycle (Keke Marwa), saying that the decision was informed by the need to move against the risks posed to safety of lives and property.

He said intelligence report confirmed that Okada was being used to deliver drugs to students in schools, while the quality of air in the state had since improved.

“By restricting Okada, you know CNN (Cable News Network) normally does Air Quality Update across the world and if you have noticed, Lagos was persistently on number five which is the worst and even Libya is on one but yesterday, we were on two. It is not Lagos State report, it is CNN report.

“Those machines are two-stroke engines therefore they release a lot of pollution and so the restriction will allow us to breath in good air and in the process make all of us to live longer,” Hamzat said. 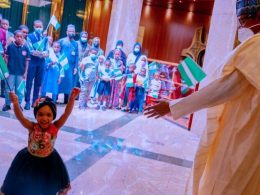 The United Nation Children’s Fund (UNICEF) has assured that it will continue to partner with government and other stakeholders to meet the agenda 2040, to make Nigeria and Africa fit for children.
byLateef Idris
No comments

Gov. Akinwunmi Ambode of Lagos State on Wednesday reiterated that his administration was committed to making the state…
byTayo Aderinola
No comments