President Muhammadu Buhari has inaugurated the $600 million Port Harcourt International Airport terminal funded by the Export-Import Bank of China and the Nigerian Government.

The News Agency of Nigeria (NAN) reports that the terminal was constructed by China Civil Engineering and Construction Company (CCECC).

He said that since the existing terminals in all the major airports in the country were opened in late 1970s and early 1980s, not much had been done to increase their handling capacities by successive administrations

The president said that the completion of the project was in line with his administration’s commitment to completing all ongoing projects initiated by his predecessors in the transport sector.

“I am very pleased to formally commission the new international terminal of the Port Harcourt Airport, Omagwa today.

“This ceremony represents a significant landmark for international air travellers, especially from the South-South region and the entire country.

“You will recall that after the opening of the major airport terminals in the country in the late 70s and early 1980s, not too much was added to increase the passenger handling capacity by successive administrations.

“Although, palliative measures were periodically carried out on facilities to repair the wear and tear.

“The Federal Government is responding to global trend of which aviation has become a catalyst for economic growth and facilitates the movement of persons,” he said.

Buhari said the construction of four international terminals in Abuja, Lagos, Port Harcourt and Kano were embarked upon by the Federal Government with a view to modernising the aging airport infrastructure, maintaining the global aviation standard and improved service delivery in tandem with international best practices.

He expressed confidence that the new terminal would help to enhance the economic activities in the state and commended the people of the state for their patience during the construction period.

Today I commissioned the new International Terminal of the Port Harcourt Airport. A significant landmark for International air travellers, not just from the South South region, but also the entire Country.
We will continue to upgrade Nigeria’s transport and power infrastructure.

Our intention in this administration is simple and clear: we will fix Nigeria’s infrastructure; we will improve the lives and living conditions of the poor, through our emphasis on agriculture and social investment. We will invest in the people of Nigeria.

In his remarks, Gov. Nyesom Wike of Rivers, said the people of the state and the entire Niger Delta region were happy that the project was completed and inaugurated.

According to Wike, what has happened today shows that the state is safe for people to come and invest.

He said the state government was ready to partner with the Federal Government to develop transport infrastructure in the state.

Wike commended the Federal Government for the completion of the new terminal building.

The Minister of State for Aviation, Sen. Hadi Sirika, said the project was executed in partnership with the Chinese Government involving 500 million dollars loan from China Exim Bank and 100 million dollars counterpart funding from the Nigerian government.

Sirika said the airport had the capacity to process seven million passengers annually, bigger than what Ghana could process annually.

He said the project was expected to be delivered within a period of two years, adding that as at the time the present administration came on board, the level of work was below 30 per cent.

According to him, the administration has achieved a milestone in the implementation of its aviation road map. 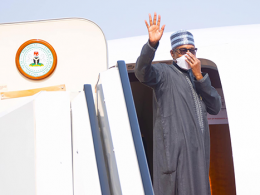 PHOTO-NEWS: Ministers on a courtesy visit to Tinubu 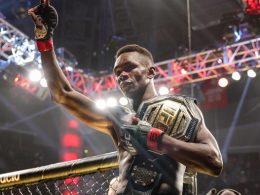 Israel Adesanya was far superior to Jared Cannonier and easily retained his middleweight title at UFC 276 at the T-Mobile in Las Vegas, Nevada.
byTayo Aderinola
No comments 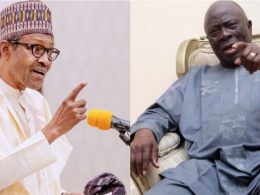 The pan-Yoruba Socio-political Organization, Afenifere, has challenged the government of President Muhammadu Buhari to take prompt action against the alleged sponsors of terrorism now.
byLateef Idris
No comments