The Executive Chairman Ojokoro LCDA, Hon Hammed Idowu D. Tijani has unveiled his achievements in his first term during a media chat with journalists on Thursday in the council’s conference hall.

byTayo Aderinola
4 minute read
Executive Chairman Ojokoro LCDA, Hon Hammed Idowu D. Tijani addressing journalist at a media parley to unveil is achievements during his first term as he also declared his ambition for a second term as the Chairman Ojokoro LCDA on Thursday at the Council’s conference room
Total
0
Shares
0
0
0

The Executive Chairman Ojokoro LCDA, Hon Hammed Idowu D. Tijani has unveiled his achievements in his first term during a media chat with journalists on Thursday in the council’s conference hall.

Hon Tijani in his address noted that he took mantle of leadership to serve on the 25th July, 2017, and enumerated some of his achievements in infrastructure, education, primary healthcare/environmental sanitation, agriculture/social services, security and youth empowerment.

On education, the soft-spoken council boss said “In order to ensure that all children of school age have access to quality and affordable basic education, irrespective of their parent’s income or status, free exercise books and necessary writing materials were always distributed freely to pupils in all public primary schools in Ojokoro LCDA at the beginning of every new academic session”.

He also affirmed that “Moreover, GCE and JAMB forms were distributed freely to indigent students on regular basis”.

The Ojokoro helmsman expressed gratitude to the Governor Babajide Sanwo-Olu state’s government administration for the completion of 31 roads in the LCDA and also noted that his administration has completed 14 roads, while two are near completion.

Hon Tijani said “Several other roads across the seven wards in the LCDA were also rehabilitated/graded and made motorable for the people”.

“Interlocking of premises of the CDC hall was also carried out by this administration.

In addition, the rehabilitation of Saviours Primary School, Alagbado was facilitated by my administration”.

On primary healthcare, Hon Tijani stated that “The Primary Health Care centre (PHC) at Isokan community has been reconstructed and provided with modern medical equipment and qualified personnel to take care of our people’s medical needs”.

“Similarly, the Primary Health Care centre at Kola, Alagbado was also upgraded to provide 24 hour medical services, while all other medical facilities in various parts of the LCDA were also given facelift”.

“As part of efforts to keep our environment clean and habitable, regular fumigation and disinfection of all public facilities such as schools, markets, religious/worship centres, Primary Health Care centres and many more, were carried out periodically, particularly during the COVID-19 lock down”.

“Food items and cash relief were also distributed to the most vulnerable people, to cushion the effects of lock down as a result of the COVID-19 pandemic”.

In the area of youth development, the sports loving council chairman said “football talent hunt programme was organized by this administration, in which some footballers discovered in the programme were sponsored for trials in Europe, as some of them are currently playing professional football in Ukraine and Belarus”.

“Similarly, quarterly empowerment programmes were organized for our women and youths on quarterly basis, with financial grants to set up small scale businesses while many got working tools for the various vocational skills acquired”.

On agriculture Chairman also averred that “in our efforts to ensure food security and sufficiency, 50 acres of land was acquired for allocation to farmers and youths that shows interest in farming, in order to boost food production in the LCDA”.

He promised to increase the agriculture allocation to 100 acres of land if giving a second term.

On the allegation that made the news on some social media alleging him of using the council funds to seek a second term ambition, the chairman responded with a laughter before alluding that “it’s a laughable and baseless allegation because I don’t have reason to, first I don’t cutout for frivolity, my recent declaration was sponsored by friends and well-wishers, for example (he removed his face-cap and showed he imprint)  this cap was sponsored by person whose name is inscribed here, so also every other items including the artists that played was sponsored by those who wish my comeback for a second term and I can’t stop them for wishing me well” he concluded.

…Use Your Position To Better Lagos- Sanwo-Olu Advises Speaker The Oba of Lagos, Oba Rilwan Akiolu, wants all…
byTayo Aderinola 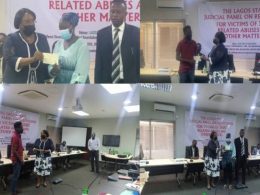