Mr Oseloka Obaze, governorship candidate of the Peoples Democratic Party (PDP) has thanked the members of the party for nominating  him as the party’s torchbearer for the Nov. 18 election in Anambra state.

Obaze in a statement after he clinched victory at the PDP primary in Awka on Monday, enjoined all to join hands with him to work for the party’s victory at the poll.

Obaze who described the victory as that of the party said he would remain focused, noting that he could now have a good night rest after a period of serious campaign

“I thank God for this day and the outcome of our party primaries. I am humbled by this show of confidence reposed on me by the representative electorate of our great party, PDP.

“I thank our party leadership, the executive governors who oversaw the electoral process, the PDP southeast zonal leaders, and  the Anambra state PDP caretaker committee, under the able leadership of Prof. ABC Nwosu.

“I congratulate and thank my fellow aspirants for their graciousness and extend a hand of fellowship to them and invite them to join me in the campaign to win the government house for our party.

“I thank my family, friends, admirers and supporters immensely.  To Ndi Anambra, I promise in humility to remain focussed on the campaign to turn Anambra around and deliver good governance to our people because Anambra deserves better.

“I will get a good night sleep and then, begin to strategise on the campaign that lies ahead. Thank you and good evening,” he said.

Obaze, who was a former Secretary to Anambra Government emerged on Monday as the  Peoples Democratic Party (PDP) governorship candidate for the Nov.18 election in the state.

Four other aspirants – Chief John Emeka, Afodike Akaolisa, Sen. Stella Oduah and Ms Linda Ikpeazu – withdrew from the race over allegations of irregularities in the list of delegates.

Governor Dave Umahi, Chairman of the Anambra Governorship Primary Election Committee, who announced the result of the poll, said that 958 delegates participated in the election.

Umahi,  governor of Ebonyi, said in the votes cast, 956 were valid while two votes were invalid.

He explained that the delegates list used in the conduct of the exercise was officially given to the committee by the national leadership of the party.

Reacting to the outcome of the election, Dr Ifeanyi Ubah, said that he was not happy with the way it was conducted.

“Ordinarily, the list of the delegates ought to have been made available to aspirants four weeks before today (Monday) in line with PDP Constitution, but regrettably, we only saw the list about three days ago.

“It was because of these flaws that some of the aspirants approached a court against this primary and I am sure that the court served the panel that is conducting this exercise,’’ he said.

The News Agency of Nigeria (NAN) reports that some uproar followed Ubah’s speech, forcing the session to end abruptly at about 7 p.m., without Obaze making his acceptance speech.

Before his appointment as SSG, Obaze was in Nigeria’s diplomatic service and later, the United Nations, jobs that ran from 1982 to 2012.

In 2013, he was a governorship aspirant under the platform of the All Progressive Grand Alliance (APGA).

A native of Ochuche Umuodu in Ogbaru Local Government Area, the PDP candidate was born on April 9, 1955 in Ogidi, also in Anambra.

He holds a Bachelor of Science degree in Political Science and a Master of Arts in the same course from Nebraska Wesley University, Lincoln, U.S. 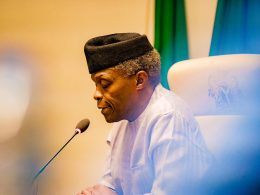 Why I am in government ― Osinbajo

Vice President Yemi Osinbajo, SAN, has said that his primary assignment in government is to serve the people and honour God.
byLateef Idris
2 shares
2
0
0
No comments 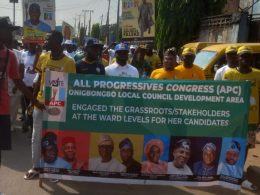 In continuation of the sensitization of voters towards the forthcoming general elections across the 18 wards in Ikeja Federal Constituency, the All Progressive Congress of Onigbongbo LCDA ward F on Wednesday had its engagement walk-through rally campaign to solicit their support for Asiwaju Bola Ahmed Tinubu Presidential ambition, the reelection of Governor Babajide Olusola Sanwoolu and Rt. Honorable James Abiodun Faleke for the House of Representative Ikeja Federal Constituency, Dr. Idiat Adebule for Lagos West senatorial, as well as the reelection of Honorable Adedamola Richard Kasunmu and election of Prince Seyi Lawal for Lagos State House of Assembly for Ikeja Constituency 11 and 1 respectively.
byTayo Aderinola
No comments

Ahead of the 2019 general elections, 21 new political parties have been registered by the Independent National Electoral…
byTayo Aderinola
No comments