The All Progressives Congress National Leader and Presidential candidate, Asiwaju Bola Tinubu visited the Oba of Lagos, HRM Rilwan Akiolu on Father’s Day, on Sunday while he returned from Abuja after his victory at the APC Presidential Primary.

The All Progressives Congress National Leader and Presidential candidate, Asiwaju Bola Tinubu visited the Oba of Lagos, HRM Rilwan Akiolu on Father’s Day, on Sunday while he returned from Abuja after his victory at the APC Presidential Primary.

Tinubu’s homecoming after he emerged as the APC Presidential candidate at the party’s primary, turned to a carnival immediately his motorcade rolled into town from the Presidential Wing of the Murtala Muhammed Local Airport, Ikeja, crowd of residents lined up along the convoy’s route, with Tinubu acknowledging cheers and waving his broom from the window.

Tinubu arrived at about 3.25pm., to the waiting hands and admiration of the host, Governor Babajide Sanwo-Olu of Lagos State, APC leaders, faithful and residents

Tinubu had, after his emergence, visited all the contenders for the exalted seat, in a bid to solicit their support and build the party’s unity.

Amid tight security, Tinubu met the Oba of Lagos, Rilwanu Akiolu, at his Iga Idun-garan’s palace, Lagos Island, for a royal blessing

Akiolu 1, who congratulated Tinubu on his victory in the APC presidential primaries, assured him of God’s support.

Akiolu said: “Insha Allah, you know the Bible says ‘don’t be afraid of anything’. So, with joy and good health, we shall wintness victory. God bless you.”

Oba Akiolu further narrated how Chief Mrs Kemi Nelson initiated emergence of the former Lagos State governor as the Asiwaju “When my father Oba Adeyinka installed my son (Bola Tinubu) as Asiwaju, Johnson came to our father Oba Adeyinka Oyekan, that Baba Balogun has passed on”.

“Omolade said Johnson told him that Kemi Nelson advised that they should quickly meet with Baba Dosunmu Akamo-Ekun, that the right person that fit the position of Asiwaju (Bola Tinubu) should be installed, and my father did what was expected of him, prayed that you’ll rein long to old age as the Asiwaju”.

“This new position (President of Nigeria) you’re attaining, only those who will be truthful with you will work with you, what will be beneficial to the populace, that will be beneficial to the whole country, I, Oba Rilwan Osuolale Aremu, I can confirm that you’ve a lot of vision, and God Almighty Allah, who had used President Buhari, Shetima, Ganduje, and all of them to this stage will finish it hundred percent, and all will be well with you” the royal father prayed.

Tinubu, in his address, thanked residents and everybody for their support, including Sanwo-Olu, for his efforts, and described him as a lucky governor, while praying for the Oba of Lagos that his reign would be successful.

According to him: “They very lucky governor of Lagos State, I must say openly here, thank you very much for the hard work and loyalty. For the deputy governor, I say the same.

“Without a good backup, you cannot have a successful leader and you cannot leave your home or office, so we thank God Almighty.

“He’s (Tinubu) happy to be back home and today is Father’s Day. The son of the soil is back home.

“Baba (Akiolu), you’ll live long; God will not take you from us, Amen. All the prayers you’re offering for us are answered in your presence.”

The APC Presidential Candidate also eulogized and prayed for the top ranking Member of the Federal House of Representatives, representing his political constituency of the Ikeja Federal Constituency, Rt. Hon James Abiodun Faleke for his support.

Asiwaju Tinubu alluded “One of your sons that I haven’t prayed for here, his James Faleke, he is a very good son, may God let him leave long, he shall never be put to shame, God will never abandoned you” he prayed.

Meanwhile, while waiting in the Lagos Governor’s Press Crew bus at Akiolu’s palace, after being shut out by overzealous policemen, hoodlums attacked the defenceless journalists in the bus in an attempt to dispose them of their valuables.

But the journalists were later rescued by prompt intervention of armed security personnel.

One of the journalists, simply identified as Ms. Adeola of Western Post medium, was not lucky, as she had  her left eye injured in the process. 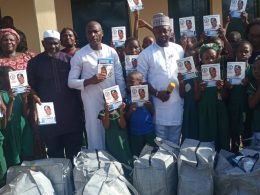 The ranking federal  lawmaker Representing Ikeja federal Constituency and Chairman, House Committee on Finance at the House of Representatives.. Rt. Hon (High Chief) James Abiodun Faleke,in furtherance of his educational support initiatives,Commissioned a facilitated project of a 5 blocks of 13 classrooms equipped with desks, chairs,ceiling fans and with an office and a toilet at Army model primary school in Onigbongbo LCDA.  He also donated and distributed thousands of free exercise books and mathematical sets to all the 33 (thirty three) public primary schools in Ikeja federal Constituency,so as to help complement the effort of the State and local govt in bolstering qualitative education in Ikeja  federal constituency.
byLateef Idris
No comments

NEMA warns of flood in 102 LGAs

The National Emergency Management Agency (NEMA), has warned of imminent flood in 102 Local Government Areas across 28…
byTayo Aderinola
No comments 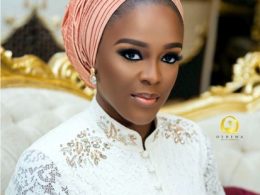 The League of Former Ward Chairmen in Ikeja Federal Constituency has paid a condolence visit to the Chief of Staff to the Lagos State Governor, Mr. Tayo Ayinde who lost his wife, Princess Adedoyin Ayinde last week Sunday.
byTayo Aderinola
No comments