The Coalition of Northern Groups, which asked the Igbos to leave the North by October 1,  has withdrawn the quit notice.

The withdrawal of the notice issued in what the coalition described as the “Kaduna Declaration”, was announced yesterday at a news conference attended by Borno State Governor Kashim Shettima.

Others at the conference included: a former Kano State governor, Kabiru Gaya, former Agriculture Minister Sani Zango Daura and some Igbo leaders across the North.

The coalition’s spokesman, Abdulaziz Suleiman, said the group took the decision in view of its members’ interest in a united and peaceful Nigeria.

The group, however, urged the Federal Government to allow Igbo to hold a referendum to determine their future.

It also urged the immediate closure of open drug markets across the North, which they claimed the Igbos were using to sell fake and adulterated drugs.

The coalition called for the immediate revocation of landed property, where such fake drugs are sold.

Suleiman said: “Mindful of the concerns generated by the clause in the Kaduna Declaration that advised the Biafran Igbo to relocate from northern Nigeria and for northerners in the Southeast to do likewise, and our commitment to the unity of our dear country, we immediately opened channels for dialogue and interaction with government agencies, national and international groups, institutions and figures.

“Admittedly, we came under intense persuasive pressure from genuinely concerned national, political, traditional, religious and cultural leaders prominent among which were: a section of the Northern Governors’ Forum under its Chairman and Borno Governor Shettima, northern traditional rulers and the Directorate of State Security (DSS).

“We also had several fruitful interactions with various concerned individuals and groups. Most significant was our correspondence with the then Acting President, Prof. Yemi Osinbajo and most recently our interface with the Presidency through the Special Assistant to the President on Political Matters.

“As a consequence of these vigorous engagements and as cultured people with a tradition of respect for our national values, leaders and elders, we are today pleased to announce the immediate suspension of the relocation clause, otherwise referred to as the quit notice from the Kaduna Declaration.

“This suspension we are proud to say, is also out of respect for and in reaffirmation of our allegiance to one, united, peaceful and prosperous Nigeria and in our unshaken confidence in the political will and sincere commitment of our dear President Muhammadu Buhari to take a holistic look at all the concerns we raised.

“We are also pleased to announce here that the Kaduna Declaration has achieved most of its major objectives, chief among which include forcing the hitherto deliberately neglected dangerous Biafran issue to the front burner of the nation’s discussion agenda.

“In the meantime, we shall firmly pursue our petitions to the United Nations and the Nigerian federal authorities calling for the appropriate sanction of Nnamdi Kanu, other IPOB leaders and their sponsors in addition to labeling them a terror outfit.”

He stressed that the withdrawal of the quit notice was based on certain terms.

Suleiman went on: “As we honour and respect the above genuine search for a solution, it is important to also point out that a simple conversation or some form of window dressing without getting to the crux of the matter will only end up as a temporary solution that leaves the nation and the younger generation with a burden of dealing with the problem in the future.

“Taking all other issues raised in the Kaduna Declaration over the past few months, vis a vis the effort by various government and non-governmental bodies to engage us in dialogue, we submit that there is the need to look at the following issues holistically as safeguards against future ethnic tensions.”

“Allow the Igbo and support them to hold a referendum to decide their future either as Nigerians or as Biafrans in view of the fact that the population of the Igbo that supports Biafra is far larger than the few who appear to be against it.

“Failure to do that will only douse this tension temporarily while they regroup to prepare for the war, they have always craved and openly called for. We are opposed to war with any part of this country and we are opposed to any situation that will lead to war.” 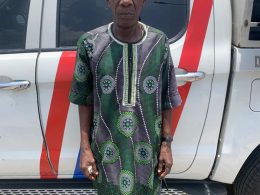 Officials of Rapid Response Squad (RRS) on patrol of 3rd Mainland Bridge rescued a 67 year old man from committing suicide when he attempted to leap into the Lagoon on his birthday on Monday afternoon.
byTayo Aderinola
No comments 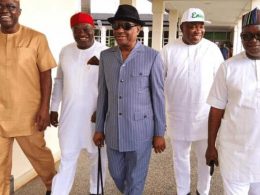