The Lagos State Government has expressed confidence that the preparation of a Model City Plan for Lagos Island will propel redevelopment of the former capital territory.

The Lagos State Government has expressed confidence that the preparation of a Model City Plan for Lagos Island will propel redevelopment of the former capital territory.

Commissioner for Physical Planning and Urban Development, Dr. Idris Salako, disclosed this on Tuesday in his welcome address at the inauguration of the Technical Committee for the preparation of Lagos Island Model City Plan at the Joseph Awogbemi NITP House, Alausa, Ikeja.

Salako said that the proposed Lagos Island Model City Plan was envisaged to properly position the area for achieving the T.H.E.M.E.S. Agenda vision of Making Lagos a 21st Century Economy.

He added that the plan would address sectoral and spatial issues engendered by population explosion, just as it would serve as a guide on land uses and approval orders among other planning parameters.

Explaining that the Technical Committee consists of members from various Ministries, Departments and Agencies who would prepare the plan, Salako stated that Lagos Island is one of the two remaining urban settlements yet to be covered with a comprehensive planning document to guide both the present and future growth of the State’. Kosofe Model City Plan, which is the second, is in progress.

“A Model City Plan for Lagos Island is essential to create a sustainable, organised, livable, business and tourism-friendly environment as well as manage future growth. It will unlock potentials embedded in the huge waterfront assets and develop a framework that will allow Lagos Island to harness its strategic position in the State”, he said.

Also speaking at the event, the Special Adviser to the Governor on Urban Development, Mr. Ganiyu Adele Ayuba said the plan represents hope for the re-enactment of the glory of Lagos Island and urged members of the technical committee to view the assignment as a clarion call to serve the State by providing the needed information and technical advice to assist the Consultants on the project.

In his remarks, the representative of Dar Al-Handasah Consultants Limited, Arc. Muhammed Ramadan, implored members of the committee to assist in enriching the Lagos Island Model City Plan with their technical inputs. 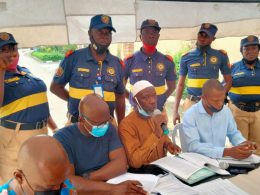 In line with the present security challenges in the country and the commitment of the executives aimed at strengthening cureurrent security architecture, Ifako Ijaiye Harmony Community Development Association in partnership with the Neighbourhood Safety Corps as well as Nigeria Security and Civil Defense Corps (NSCDC) has taken a collaborative efforts with the government security personnel in order to ensure improved security architecture in the Estate.
byLateef Idris
10 shares
10
0
0

The front section of the six-storey building gutted by fire on Tuesday in Lagos Island has collapsed, killing…
byTayo Aderinola