Man sent to prison over attempt to commit suicide

The Police at the Maroko Division, Lekki, Lagos have arrested a 27-year old unemployed, Owolabi Ogunwande for allegedly attempting to commit suicide at the Lekki phase 1 toll gate, Lekki, Lagos and the Maroko Police Division with a rope tied to his neck.

The suspect allegedly decided to take his life over his inability to secure a job in Lagos since he got to the state in March 2018.
He reportedly came to Lagos from Osun State to look for a job.

A Police source alleged that the timely intervention of a Man ‘O War official identified simply as Omotayo attached to the Lekki Concession Company (LCC) saved the suspect from killing himself.

Narrating his ordeal to the Police during investigation, Ogunwande stated: ”I am a Native of Onyo area of Osun State and I came to Lagos in March, 2018 to look for a menial job to survive because I dropped out from JSS 3 because my parents could not pay for my school fees.

”I decided to take my life on 28 June, 2018 after all efforts to secure a job since March, 2018 and even to see money to go back to my state proved abortive.

“On the day of the incident, while I was wandering around CMS bus stop, Lagos Island looking out for a sign post for job opportunities without food in my stomach, I came across a thick rope and picked it and one spirit just told me that since I could not secure a job and no money to eat or go back to my State and I was not even useful to myself and my parents anymore that I should just commit suicide and go away from this world.

“And based on the directive from the spirit, I took the rope to Lekki toll gate, tied it to my neck and climbed a pole to tie it, but a uniform man just came from nowhere to the scene and raised an alarm which attracted people who removed the rope from my neck and from the pole and handed me over to the Police.

“And at the Police Station, I still made another attempt to commit suicide but the Police prevented me. But I am still going to kill myself because there is no helper in this world again,” Ogunwande allegedly told the Police.

The suspect was charged before an Igbosere Magistrate’s Court on a two-count charge of felony, to wit, attempting to commit suicide at Lekki toll gate on 28 June, 2018 and at Maroko Police Station on 2 July, 2018 with a rope.

Police Counsel, Cyriacus Osuji informed the Court in charge No R/45/2018 that the accused attempted to commit suicide at Lekki toll gate and at Maroko Division, Lagos for reasons best known to him

He said the offences the accused committed were punishable under sections 235 of the Criminal Laws of Lagos State, 2015.

The accused pleaded guilty to the crime in the open court and Magistrate Aro Lambo adjourned the case for facts and sentencing. 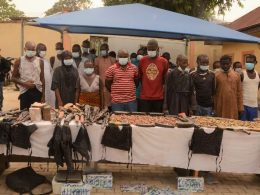 The Inspector-General of Police, IGP Usman Alkali Baba, has charged Police Operatives across the country to sustain the tempo in the fight to curb violent crimes in the country.
byTayo Aderinola
No comments

The Nigerian Government has confirmed the second death from coronavirus (COVID-19) in the country. The Minister of Health,…
byTayo Aderinola
No comments Supervisors and Advisers appointed to replicate the functions of the Office of Civic Engagement at the Local Government and grassroots level have paid a courtesy visit to the Special Adviser to the Governor on Civic Engagement, Princess Aderemi Adebowale.
byTayo Aderinola
No comments