The visit which was apparently a solidarity visit turned to a political walk as Ola Western’s supporters stormed Mile 2 Blue House.

Ola Western who arrived Mile 2 Blue House terminal at about 2:06 PM was welcomed with funfair by Mile 2 Community Youth, residents, and members of the All Progressives Congress (APC).

He was received by the Youth Community leader, Mr Micheal Adewale (Hotwater) before he was ushered to meet Mr. Prince Ajele Abeyi Abayomi (Ikomodina), his executive members and other top community leaders.

While addressing the youths who gathered at the Blue House, Ola Western said: “I only came here to greet you. We are glad with what Ikomodina has been doing in Mile 2, Amuwo Odofin. I thank you for all the support you have been giving me.”

He continued: “I’m a product of the street like you. I’m a street man like you. This is my neighborhood. Therefore, my representing you is to make sure that your voice and that of the needy is heard.”

“Youth, let chart a new course. I am sure everyone has PVC ready, be courageous, and be determined to delivered Amuwo Odofin for All Progressives Congress, candidates come 2023 election.”

Ola Western emphasised that the 2023 general election is a great opportunity for everyone to vote for rightful candidates of the All Progressives Congress. He also charged the youths to make sure they vote for and mobilise supporters for Senator Asiwaju Bola Ahmed Tinubu as the next President of the Federal Republic of Nigeria, Mr. Babajide Sanwo-Olu, Governor of Lagos State, Dr. Mrs. Idiat Adebule as the next Lagos West Senatorial Senator, Hon. Prince Lanre Sanusi (PLS) as the next Amuwo Odofin Federal Constituency’s Representative, Hon. Olaitan Segun (Ola Western) as the next Member of Lagos State House of Assembly for Amuwo Odofin Constituency l.

“I believe that Ikomodina has a good political records in Amuwo Odofin in delivering his polling units and ward peacefully and successful. This time, I’m confident that he’ll deliver with credible votes and results to prove l as a youth leader in Amuwo Odofin.”

Commenting, Ikomodina said the man Ola Western is a man of the people. “Olaitan is a grassroots politician and an IBILE (indigene) that everyone must vote for.” He added that he has not become a member of the Lagos State House of Assembly and the community is already feeling his impacts.”

“Beyond opening an account in any of our over 700 branches, we are delighted with the investments at…
byTayo Aderinola
No comments 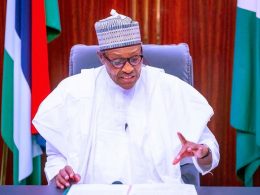 President Muhammadu Buhari on Saturday condemned repeated bandit killings in Zamfara and Kaduna States, urging the nation’s military to respond to the worrying situation in a language that the bandits understand.
byLateef Idris
No comments