Today Monday 26th March at the Police College, Ikeja, Lagos women across all walks of life gathered to endorse Governor Akinwunmi Ambode for a second term in office.

The convener, Chief Mrs Kemi Nelson, the All Progressives Congress National Women Leader (South-West), in her opening remarks which she termed “Women Let’s Take a Stand”, appreciated Governor Ambode for his efforts in ensuring that women are duly recognized and involved in governance. She noted that there are 5 women in the State Executive Council, 2 Heads of Service in succession, 2 Director Generals, 21 Permanent Secretaries, Chairpersons of the Public Service Commission and Lagos State Independent Electorate Commission are all women Governor Ambode has involved in his administration. She urged all women in the state to support and a take a stand in the second term bid of the Lagos State Governor Akinwunmi Ambode.

Mrs Adejoke Adefulire, the Senior Special Assistant on SDG to President Muhammud Buhari also acknowledged the developmental strides of Ambode’s administration stating that he deserves another term for the good job he is doing.

The Deputy Governor Dr. Mrs. Idiat Adebule appreciated the women for their support and promised to convey their message to the Governor.

Other dignitaries at the event include Chairperson of Conference 57, Hon. Omolola Essien, the 57 APC LGA Women Leaders, Ward Women Leaders and a host of others. 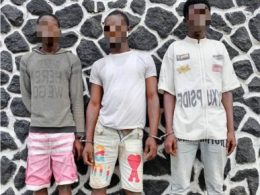 Operatives of the Ketu Division of the Lagos State Police Command have arrested three members of a traffic robbery gang notorious for dispossessing motorists of their belongings at Ile-Iwe/Kosofe,
byTayo Aderinola
No comments 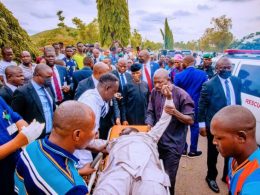 Osinbajo not involved in road accident – See what really happened

Contrary to claims in a popular website and on the social media, Vice President Yemi Osinbajo was not involved in an accident on Airport road Abuja on Monday morning.
byLateef Idris
No comments

… Commissioner Says Students Must Not Exceed 20 per Class The Lagos State Ministry of Education, on Monday,…
byTayo Aderinola
No comments

The Central Bank of Nigeria, CBN on Friday said it has revoked the operating licence of Skye Bank…
byTayo Aderinola
No comments