The Permanent Secretary/Surveyor-General, Office of the State Surveyor-General (OSSG), Surv. Olutomi Sangowawa, has hosted delegates from the State Land Use Allocation Committee, LUAC, in his office to establish synergy for a harmonious and robust relationship to enhance service delivery.

byLateef Idris
1 share
1
0
0
2 minute read
The Permanent Secretary/Surveyor-General of Lagos State, Surv. Olutomi Sangowawa, with Directors in his office and members of the Land Use Allocation Committee (LUAC) during the visit.
Total
1
Shares
1
0
0

The Permanent Secretary/Surveyor-General, Office of the State Surveyor-General (OSSG), Surv. Olutomi Sangowawa, has hosted delegates from the State Land Use Allocation Committee, LUAC, in his office to establish synergy for a harmonious and robust relationship to enhance service delivery.

Welcoming the team, Surv. Sangowawa expressed delight about the LUAC team’s quest to collaborate for mutual benefits and cooperation with professionals in his Office.

“The need to collaborate with LUAC is pertinent as it will foster a better understanding of the work processes and create a mutual relationship between both institutions”, he said.

Sangowawa encouraged the delegates to work towards future plans that would upscale available schemes, emphasising the need for adequate resources that will promote effective performance. He urged the LUAC to also come up with statistics required for the compilation of e-surveys for better service delivery.

While noting that issuance of e-surveys to allottees would improve turnaround time, the Permanent Secretary envisaged that the professional expertise in the OSSG will bring about a seamless workflow between his team and the LUAC for excellent service delivery to Lagos residents.

Responding, the Executive Secretary, Lands Bureau, Mrs. Lolade Ajetunmobi, said her team’s visit was aimed at discussing better ways of working together to achieve the ultimate goal in respect of land and survey matters in the State.

Her words: “There is an urgent need for us to work as a team in order to curb hindrances emanating from communication gap so that we can continually project the good work of the State government as communication is key”.

She thanked the Permanent Secretary/Surveyor General for the warm reception, cordial working relationship and prompt response to numerous issues, maintaining that the bond between the workforce of both organisations has been strengthened.

Mrs. Ajetunmobi advised scheme officers to collaborate by sorting out emanating issues amicably, just as they work towards achieving the set goals of the State Government.

Guber Poll: Tension in Osun ahead of Supreme Court judgement

The Osun State Police Command, on Thursday, said security has been beefed up in the state to prevent…
byTayo Aderinola 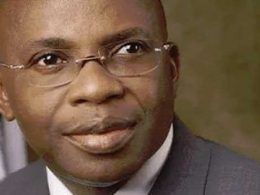 Justice Taiwo Taiwo of the Federal High Court Abuja has ordered the Attorney-General of the Federation and Minister of Justice, Abubakar Malami to take over the prosecution of former Governor of Imo State, Mr. Ikedi Ohakim.
byLateef Idris

Ighalo to get super-sub role at Man United

Obasa Felicitates Ogala on his elevation to the rank of SAN.