To further accelerate the impact of its capacity development drive on talented youths, the Babajide Sanwo-Olu-led Lagos State administration has unveiled the Gidi Creative Centre.

To further accelerate the impact of its capacity development drive on talented youths, the Babajide Sanwo-Olu-led Lagos State administration has unveiled the Gidi Creative Centre.

The programme is a partnership with a full-service creative agency, The Temple Company.

The initiative targeted to empower 200 youths across 10 skill areas was launched by Commissioner for Tourism, Arts and Culture, Uzamat Akinbile-Yusuf at state-of-the-art Ogidi Studios, Lekki, Lagos.

Declaring registration for participation opened, Idris Olorunnimbe, Group Chief Executive Officer of The Temple Company said that registration to enrol into training is accessible till September 8 to youths who are residents of Lagos State.

To register, interested persons were advised to visiwww.gidicreativecentre.com and apply for their preferred courses.

Idris explained, “The creative industry is the future of the world and Nigeria cannot be left behind. The Lagos State Government under the leadership of Governor Babajide Olusola Sanwo-Olu recognizes this and has decided to take the front seat. This is not the first training embarked upon by the Lagos State Government but I dare say that it would be the best they have done so far. I predict they would keep coming back to us for more because we are doing it differently. We partnered with two global tertiary institutions, the University of Lagos and Henley Business School, University of Reading, United Kingdom.”

“The most important thing that has brought together The Temple Company, facilitators of Gidi Creative Centre, and Lagos State Government together to forge this partnership is a common goal to equip the young people of Lagos to be the best they can be within the creative industry.”

On her part, Uzamat noted the initiative aligns with the vision of Governor Babajide Sanwo-Olu under the Lagos State Creative Industry Initiative (LACI) Programme. She also made a case for partnerships such as with The Temple Company as a critical plank that can help the government to make an impact. Describing Ogidi Studios as one of the best of its kind in Africa, she affirmed that the facility would enhance learning.

The General Manager of Lagos State Traffic Management Authourity (LASTMA), Mr. Olajide Oduyoye has stated that there was…
byLateef Idris
No comments

It has been over 24 hours, yet I am still in search of the right words to portray…
byTayo Aderinola
No comments 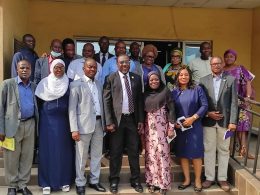 The Lagos State Muslim Pilgrims Welfare Board has called for stronger collaboration with Radio Lagos/Eko FM to strengthen the existing relationship between the two agencies.
byLateef Idris
No comments

The Lagos State Government has condemned the attack on members of the COVID-19 Task Force, by some worshippers…
byTayo Aderinola
No comments