The Lagos State Government has announced traffic diversion for the upcoming All Progressive Congress (APC) Presidential and Gubernatorial rallies scheduled to hold on Saturday, 26th November 2022 at the Teslim Balogun Stadium, Surulere, Lagos from 9.00 am to 4.00 pm.

The Lagos State Government has announced traffic diversion for the upcoming All Progressive Congress (APC) Presidential and Gubernatorial rallies scheduled to hold on Saturday, 26th November 2022 at the Teslim Balogun Stadium, Surulere, Lagos from 9.00 am to 4.00 pm.

The APC Presidential Candidate, Asiwaju Bola Ahmed Tinubu and his running mate, Sen Kashim Shettima are expected to be at the stadium for the mega rally.

Commissioner for Transportation, Dr. Frederic Oladeinde made this known on Wednesday through a statement released by the ministry, advising Lagosians to plan their movement around Teslim Balogun Stadium, Funsho Williams Avenue, and Alhaji Masha areas in Surulere.

He warned that human and vehicular movement around the affected areas would be regulated as there would be a series of traffic diversions for safety and security management purposes.

Explaining further, the commissioner said traffic on Funsho Williams/Western Avenue inward Surulere/Ojuelegba will be diverted to the Express Lanes/Stadium Bridge at Alaka bus stop for people going to Mushin, Palm groove, Ikeja, Ojota, Ikorodu areas, and off to Bode Thomas and Eric Moore at Iponri Estate for people going to New Lagos/Surulere areas.

He added that vehicular movement on Alhaji Masha road to Akerele/Shitta junction and Funsho Williams from Olumegbon junction to Alaka would be totally restricted for safety, as only human traffic would be allowed.

Also, those from Surulere will access the Stadium via Adeniran Ogunsanya/Bode Thomas/Ogunlana Drive/Alaji Masha to connect Alaka inward to the National Stadium.

Oladeinde, who stated that directional signs, tow vehicles, and barricades would be made available, also assured that the traffic management personnel will be on standby to provide assistance and guide motorists/pedestrians during the rallies.

While reiterating that only accredited vehicles, security, emergency and essential services vehicles will be provided privileged access at the diversion points, Oladeinde, solicited for residents cooperation with all the law enforcement officials assigned to carry out their respective tasks.

The commissioner, in anticipation, expressed gratitude to residents for their patience and understanding.

Nigeria is now the 7th most stricken African country by the rampaging invisible coronavirus. This followed the early…
byTayo Aderinola
No comments

The Commissioner of Police in Lagos State, CP Hakeem Odumosu has ordered the arrest of Sergeant Lukmon Akanbi…
byTayo Aderinola
No comments 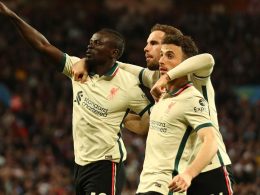 Liverpool kept their Premier League title hopes alive as Sadio Mane’s winner beat Aston Villa 2-1 on Tuesday to move level on points with Manchester City at the top of the table.
byLateef Idris
No comments