The Lagos State House of Assembly has directed the leadership of the State University (LASU) to come up with a draft bill that would criminalise encroach on its land.

Mr. Rotimi Olowo, Chairman House Committee on Finance, made this known when the institution’s Vice-Chancellor, Prof. Olanrewaju Fagbohun appeared before the Public Accounts Committee for the 2019 Auditor-General’s report in Lagos on Tuesday.

Olowo, who is a member of the Public Accounts Committee, enjoined the vice-chancellor to hastily reclaim all incursions on the lands belonging to the institution.

The lawmaker advised that invaders should be kept at bay because the university was on the way for greater deeds and would need the lands for infrastructural growth.

“With your strides, it is only a matter of time before LASU will become massive.

“The state will continue to invest in LASU, do not let land become a limitation to your structural growth,’’ he said.

Chairman of the committee, Saka Solaja, commended the vice-chancellor for the laudable achievements in the institution.

“You are an astute gentleman and your tenure is filled with numerous success stories, you turned the crisis-ridden school into the second-best university in Nigeria.

`We commend your service to Lagos state,’’ Solaja said.

Responding, Fagbohun expressed his gratitude to the legislators, saying that the House had played a prominent role in making the institution what it is today.

The vice-chancellor said on the incursions on LASU lands, some residents had trespassed on the university land in Epe community.

“There is a need to act fast if we do not nib that land issue in the bud, it will come back to haunt the school.

“We have a situation where the military, which ceded the land to us originally, is coming back to make incursions on it.

“However, we do not want anything to trigger crisis between the military and students,’’ Fagbohun said.

He said Gov. Babajide Sanwolu recently set up a joint task force of both representatives to delimit the incursions.

The vice-chancellor said the institution was also trying to stop similar incursion in the Ojo campus, where over 70 percent of its land has encroached.

He lauded the strong support that LASU has been receiving from the Assembly in ensuring that the school maintained discipline and followed the rule of law.

Another tanker explosion in Lagos

A tanker conveying Premium Motor Spirit (PMS) on Thursday morning rolled over and burst into flames on the Oshodi-Apapa Expressway, Lagos causing panic among commuters plying the route.
byLateef Idris 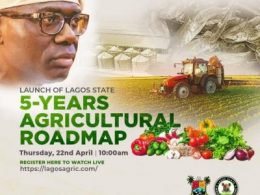 The Lagos State Government is set to launch a Five-Year Agricultural Development Roadmap on Thursday, 22nd April, 2021, in line with its T.H.E.M.E.S developmental agenda.
byLateef Idris

Some rogue Nigerian soldiers have opened fire on police operatives, who arrested a suspected kidnap kingpin in Ibi,…
byTayo Aderinola