The Confederation of African Football (CAF) has appointed Kenyan referee, David Omweno to officiate the Super Eagles clash against the Pirates of Seychelles at the Stade Linte on Saturday in Victoria.

Omweno was among the two referees suspended by CAF for three months in 2016 for poor performance.

The Kenyan referee was accused of ruling out a legitimate goal scored by Libya in their 1-0 loss to Tunisia in November 2016.

Nigeria are third in Group E with no point after losing 2-0 to South Africa in their opening game 14 months ago, while Libya and South Africa are joint leaders in the group with three points.

The Super Eagles are thus in dire need of a vital away win as the qualifying race in Group E intensifies for Cameroon 2019. Only the group winners are guaranteed slots at the finals.

#JusticeForUwa: Today I Rise In Solidarity With Women – Tinubu

The National Leader of the All Progressives Congress (APC), Asiwaju Bola Ahmed Tinubu, has lent his voice to…
byTayo Aderinola
No comments 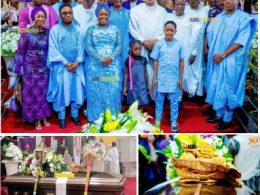 PHOTO-NEWS: Chief Mrs. Kemi Nelson laid to rest, as Family, Governors, Friends and others bid farewell to Yeye-Sewa of Lagos

The remains of the late Chief Mrs. Kemi Nelson was laid to rest after a funeral service at the Archbishop Vining Memorial Church, GRA, Ikeja, Lagos on Thursday
byTayo Aderinola
No comments

President Muhammadu Buhari has ordered the nation’s security chiefs to recover all areas being occupied by insurgents, bandits and kidnappers across the country.
byTayo Aderinola
No comments