KASUNMU WINS ‘MOST PROMISING YOUNG POLITICIAN OF THE YEAR AWARD’

It was another moment of honour, applause and recognition for hardwork at the weekend as the lawmaker representing Ikeja Constituency II at Lagos State House of Assembly, Hon. Adedamola Richard Kasunmu, was decorated with another high profile award.
The cool, calm and unassuming legislator was honoured with the “Most Promising Young Politician of The Year” at the City Pride Achievers Award 2017. The investiture ceremony took place on Saturday 23rd September, 2017at Seven Stars Event Centre, Ogba, Lagos.
According to the organisers, Hon. Kasunmu emerged as the 2017 winner of this category as a result of his outstanding legislative and political activities which resulted into the promulgation and signing into Law of two Executive Bills sponsored by him on the floor of the House early this year. The two laws, The Lagos State Sports Commission Law and The Lagos State Sports Trust Fund Law, which were passed by the House under the able leadership of Rt. Hon. Mudashiru Obasa and signed into Law by His Excellency, Gov. Akinwunmi Ambode February this year, have started yielding tremendous results in the area of enhancing sporting activities and impacting the lives of youth in the state.
Other criteria which qualified Hon. Kasunmu for the award, according to the organisers, are his efforts in reducing unemployment in his Constituency by facilitating the employment of qualified youth into government agencies in the state as well as his various welfare activities.

Also honoured alongside Honourable Adedamola Richard Kasunmu were high net-worth individuals, outstanding business icons and renowned political leaders such as Governor Ben Ayade of Cross Rivers State, who was represented by a powerful delegation, led the State Commissioner for Health. Gov. Ben Ayade, a Professor dusted 35 others Governors to emerge as the “Best Performing Governor of The Year 2017”. Others on the night’s roll of honour were the Chairman, House Committee of Women Affairs and Poverty Alleviation, Lagos State House of Assembly, Hon (Mrs) Mojisola Lawal-Meranda who went home with The Most Promising Grassroots Female Politician of The Year”. Popular and highly cerebral Cop, ACP Abba Kyari, who has come to be known as the ultimate kidnappers’ nemesis in Nigeria, was honoured with a prestigious category of award for his various achievements in cracking tough criminal cases across Nigeria, especially the lead role he played in bringing down one of the most notorious Kidnap kingpin in the history of Nigeria, Evans and his gang.

In his acceptance speech, Hon. Adedamola Richard Kasunmu, who is also the Chairman, House Committee on Youth, Sports and Social Development, expressed his appreciation to Daily Pride Communications, the organisers of the event.
According to the young and vibrant legislator, who is known for his scholarly contributions to issues on the floor of the House; “ordinarily, I am not an award freak, I believe in working hard and letting my performance speak, but I have to bend the rules to accept this in order to reciprocate the good gesture of the organisers, who are also young individuals like me, and also to encourage their work”.
Speaking further, Hon. Kasunmu dedicated the award to God Almighty, the People of Ikeja Constituency 2, Asiwaju Bola Ahmed Tinubu, the Speaker of Lagos State House of Assembly, Rt. Hon. Mudashiru Obasa and all the good Youths of Nigeria.
Hon. Kasunmu was accompanied to the event by two of his Party’s Ward Chairmen, Alh. Lukman Saliu and Comrade Dayo Olanrewaju and other personalities 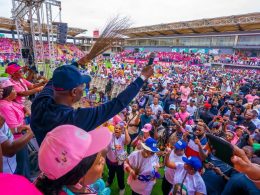 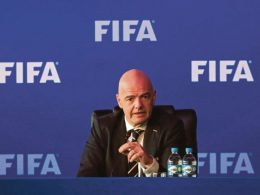 FIFA Orders Russia not to play under flag, sing anthem

Fifa has ordered Russia to complete their upcoming matches without their flag, anthem and as the Football Union of Russia in neutral territory, following the invasion of Ukraine.
byTayo Aderinola
No comments