The battle for supremacy between two of the most powerful Lagos female politicians, South West All Progressives Congress (APC) Women Leader, Chief Kemi Nelson and Lagos APC Women Leader, Hon. Jumoke Okoya-Thomas appears to have taken a new dimension as the supporters of the two gladiators have resorted to physical combats.

Reports from the women indicated that the matter has culminated into attacks and counter-attacks by their supporters and we gathered that these have led to body injury and destruction of properties.

Just as pictures of Alhaja Abiodun, Okoya’s Personal Assistant, who was allegedly seriously injured have been flying around, a video has equally surfaced, under police supervision, where the office of Chief (Mrs.) Kemi Nelson was destroyed by thugs alleged to have been sent from the camp of Hon. Olajumoke Okoya-Thomas.

There have been different versions to the story, but the woman, whose name is being peddled to have battered the PA of Okoya-Thomas, Miss Ayo Alli-Balogun narrated what she said led to the crisis.

According to her, “I feel I owe it to you all to give a summed up explanation on what happened on 27th of August, 2018 at the All Progressives Congress State party secretariat.

“For a while now, Hon. Jumoke Okoya-Thomas (APC Lagos State Women Leader) has been on a war path with APC South-West Women Leader, Chief Mrs. Kemi Nelson for reasons best known to her.

“I, Ayo Alli-Balogun became aware of Hon Jumoke’s detest for her superior and South-West Women Leader of our great party, All Progressives Congress at the final mega campaign rally of H.E Kayode Fayemi days before the Ekiti State gubernatorial elections 2018.”

Alli-Balogun alleged that Okoya-Thomas, out of nowhere and no provocation, started raining insults on Chief Nelson that, she, Jumoke was not allowed into the VIP pavilion of the rally.

She stated that while Jumoke was raining her insults, she saw her (Alli-Balogun) and immediately verbally attacked her calling her “Aja Kemi Nelson” meaning Kemi Nelson’s dog!

“I ignored her and proceeded to my seat. Hon. Jumoke Okoya-Thomas’ attack on my person came to a head on Wednesday 22nd August 2018 at the country home of the Lagos State Governor, H.E Ambode during His Excellency’s sallah gathering. Hon. Jumoke accused me of staring at her and threatened to deal with me.

“The shocking thing about her utterances was that, at no point did I have any close contact with her; not to say I attempted any form of attack on her.

“The worrying bit about her utterance and actions is that Hon. Jumoke seems to be clairvoyant and can see things that don’t exist. Madam Jumoke was seated about 15 huge tables away from where I stood with the Lagos State Commissioner of Police to receive His Excellency who was making the rounds greeting and taking pictures with guests.

“I noticed madam Jumoke’s visible agitation as she wagged her hand towards my direction in a threatening manner when she said “you are staring at me! I will deal with you!!” Naturally, I was shocked by Madam Jumoke’s conduct so I informed party leaders present,” she revealed.

Alli-Balogun added that the leaders promised to look into the matter and asked that she should go on with my dancing.

She added, “However, I thought it imperative to notify APC State Chairman of my experience with Madam Jumoke Okoya-Thomas during the governor’s sallah gathering.”

She narrated further, “I visited the State Party Chairman on Thursday 23rd of August, 2018 but he had left, I called and booked an appointment for Monday 27th of August, 2018 to which the party State Chairman agreed.

“On the fateful day, I went to the State Chairman’s office in company of three senior women of the party to inform him of Hon. Jumoke’s threat to deal with me.

“As fate would have it, I was informed that the State Chairman was in a meeting.

“After waiting for an additional 30mins, I decided to leave as it was apparent Madam Jumoke was going to be in the office for a long time. On my way to the South-West Women leader’s office within the party secretariat, I was apprehended by Hon. Jumoke’s PA (Alhaja Abiodun) and her police orderly.

“They both descended on me with slaps, blows and lashes from a horse whip wielded by the police orderly attached to Hon. Jumoke.

“I naturally attempted to defend myself and detached myself from the stronghold of the vicious Alhaja Biodun. I then returned to the Chairman’s office to show him my battered face, body and clothes.

“About an hour later in Chief Mrs. Kemi Nelson’s office in the presence of Deputy and Vice Chairman of the party. Six hefty fierce looking men in black Tee-shirts with scorpion drawn on them bursted into the South-West Women Leader’s office.

“They told us they are from Lagos Island and have been directed to kill Chief Mrs. Kemi Nelson and I.

“Jumoke Okoya-Thomas at some point during the assault came into Chief Mrs. Kemi Nelson’s office shouting that “Kemi Nelson is in the toilet, she must be killed! Once she’s killed her followers would disperse” in Yoruba.

“Every equipment found in Chief Kemi Nelson’s party office were destroyed! We were rescued by a team of the Nigeria Police Force about an hour later.

“Whilst Madam Jumoke Okoya-Thomas was speaking to the police Area Commander who visited the party secretariat; she was quoted to have said to the Commander that “she was fighting for her right”, “she admitted inviting the armed men in black Tee/shirt with scorpion drawn on the back and refused Alhaja Biodun to be interrogated by the police at the Party’s State secretariat.

Muhammadu Buhari on Monday in Abuja  has approved the establishment of state and local government police. Vanguard Details…
byTayo Aderinola
No comments 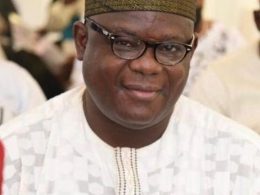 Lagos to clamp down on unregistered Complementary, Alternative Medicine practitioners

Lagos State Traditional Medicine Board (LSTMB), has given notice that it will enforce the directives of the National Council on Health (NCH) mandating all practitioners of Complementary and Alternative Medicine (CAM) in every part of the country to register their operations or face the full wrath of the law.
byTayo Aderinola
No comments