Ikeja Games 2023: 600 athletes to slug it out in 10 sporting activities powered by Faleke

Over 600 athletes would be participating in the Ikeja Games organised by the ranking member and Chairman Finance Committee of the House of Representatives, Rt. Hon. James Abiodun Faleke in partnership with the National Institute for Sports (NIS).

Over 600 athletes would be participating in the Ikeja Games organised by the ranking member and Chairman Finance Committee of the House of Representatives, Rt. Hon. James Abiodun Faleke in partnership with the National Institute for Sports (NIS).

The games opened on Monday, with accreditation of participants who will be participating in 10 different sports among them football, basketball, Table Tennis, Chess, Scrabble and Snooker.

Other games that would be competed are Draft, Ayo Olopon, Ludo and Cards.

Unveiling the maiden edition of the games, the Chairman of the Main Organising Committee of the Ikeja Games 2023, Barr Bayo Ayo said in order to ensure the delivery of a well-organized sports competition, the game’s partner, the NIS would be working with the MOC and the Local Organising Committee (LOC), to achieve the milestone.

He said the ideal has been on the board for over two years and efforts are on to establish a Trust Fund for the games, adding that the focus of the games is to produce sportsmen and women who would grow to become global champions.

He said while the constituency office would be used for the individual games, the two team games would be communicated to all participants from the 10 wards in the Ojodu Federal Constituency.

The winner of the individual games will go home with N100, 000, while everyone who registered for the games would go home with stipends.

The Technical Director of the Games, Tayo Aderinola noted that athletes were drawn from the 10 wards recognised by the Independent National Electoral Commission (INEC) within the Ikeja Federal Constituency and the football tournament will be contested by teams representing the respective wards.

The Vice Chairman of Ojodu LCDA Hon Bunmi Oluyadi applauded Rt. Hon Faleke for the initiative of the game. He said the game is an opportunity to build the youths in more productive endeavours as it offers an opportunity for youths with God-given talents to horne them for a better rewarding future.

Why We Voted Against Asisat Oshoala – NFF Reps Defend ‘Betrayal’

Some officials of the Nigerian Football Federation, (NFF), who all voted against Barcelona star, Asisat Oshoala in the…
byTayo Aderinola
No comments

On the 22nd of November 2020, 155 new confirmed cases and 1 death was recorded in Nigeria Till…
byTayo Aderinola
No comments 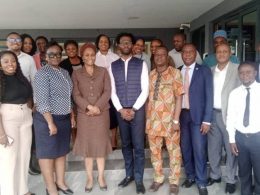