Members of the National Executive Council of the Academic Staff Union of Universities will on Monday hold a crucial meeting to decide on whether to go on a fresh strike or not.

Members of the National Executive Council of the Academic Staff Union of Universities will on Monday hold a crucial meeting to decide on whether to go on a fresh strike or not.

The decision to convene the emergency NEC meeting, which is to be held at the ASUU National Secretariat on the University of Abuja campus, is coming on the heels of the October salary cut received by members of the union.

A NEC member, who does not want his name in print, told our correspondent that members of the union across all the branches were disappointed about the action of Minister of Labour and Employment, Chris Ngige.

The official said their members had it on good authority that it was the minister who wrote to the necessary quarters, directing them not to fully pay October salary to lecturers.

“I can confirm that, ASUU NEC will meet on Monday, November 7, to take a decision on strike action or not. This is an aftermath of half-salary paid by the Nigerian govt.

“Branches say they are disappointed in the FG. The union should have a decision on the same day,” he told Daily Trust on the phone.

President of the union, Prof. Emmanuel Osodeke could not be reached for comments as at when filing this report.

ASUU had called off an eight-month strike on October 14, following court rulings and the intervention of the Speaker of the House of Representatives, Hon Femi Gbajabiamila.

Another NEC member said the most “worrisome” part of the whole thing was the payment of salary backlogs to medical lecturers in the universities while other teachers in other discipline were neglected.

In reaction via a statement issued on Saturday, Ngige dismissed ASUU members’ allegations on selective treatment.

He described the allegation as grossly “inaccurate, misleading and barefaced distortion of facts”, pointing out that members of ASUU were paid their October salary pro-rata, and not half salary.

He said the pro-rata was done because they cannot be paid for work not done.

The minister maintained that he never directed the Accountant-General of the Federation to pay the university lecturers half salary.

“Following the ruling of the Court of Appeal, which upheld the order of the National Industrial Court of Nigeria (NICN), asking ASUU to go back to work, the leadership of the union wrote to the Minister, informing him that they have suspended the strike.

“The Federal Ministry of Education wrote to him in a similar vein and our labour inspectors in various states also confirmed that they have resumed work.

“So, the minister wrote to the Federal Ministry of Finance, Budget and Planning, directing that their salaries should be restored.

“They were paid in pro-rata to the number of days that they worked in October, counting from the day that they suspended their industrial action. Pro-rata was done because you cannot pay them for work not done. Everybody’s hands are tied,” he said.

The minister equally faulted a statement by the Chairperson of ASUU, Usman Danfodiyo University Sokoto (UDUS) branch, Muhammad N. Al-Mustapha, accusing him of biased payment of salaries to selected professional members of the union.

He added, “Those obviously being referred to by the UDUS ASUU chairperson were members of the Medical and Dental Consultants Association (MDCAN) who abstained from the eight-month strike of ASUU because they abhorred the incessant strikes by the union and its grave effects on medical education in Nigeria and production of more medical doctors.

“Accusing the Honourable Minister of Labour and Employment, Sen. Chris Ngige, of biased payment of salaries to selected professional members of ASUU is a barefaced distortion of facts. Mustapha said he received information that a segment of the staff in the College of Health Sciences (CHS) has been paid seven months of their withheld salaries from March to September, due to a letter written to the Minister of Finance, instructing the exemption of the under-listed staff on the application of ‘No Work, No Pay’ rule

“To set the records straight, the medical lecturers who are being referred to by the Chairperson of ASUU UDUS branch, abstained from the eight-month strike of ASUU. This has been corroborated in a press statement by the Chairman, MDCAN UdUS, Dr B. Jubrin and Secretary, Dr I. G Ango, on Friday, November 4, 2022.” 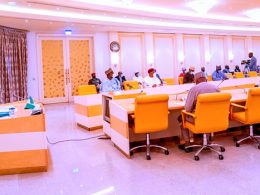 President Muhammadu Buhari called for global support to develop the resources in the Niger Basin area – home to over 160 million people who depend on the river as a means of sustenance.
byLateef Idris
No comments

The Federal Government has ordered trucks and trailers parking on the Lagos-Ibadan Expressway to vacate with immediate effect.…
byTayo Aderinola
No comments

I will not favour anyone to compromise 2023 elections – Buhari

President Muhammadu Buhari, on Tuesday, said he will not favour any politician to compromise the electoral process in…
byTayo Aderinola
No comments