U.S. tech giant Google has reiterated its commitment to protect users after a media report said third-party app developers were allowed by Google to read emails of its Gmail users.

“We continuously work to vet developers and their apps that integrate with Gmail before we open them for general access, and we give both enterprise admins and individual consumers transparency and control over how their data is used,” she wrote in an official blog post.

Google’s response came a day after The Wall Street Journal (WSJ) on Monday unveiled an industry “Dirty Secret” that Google continued to let hundreds of third-party software developers scan the inboxes of millions of Gmail users who signed up for email-based services.

“Google does little to police those developers, who train their computers … to read their users’ emails,” though Google vowed a year ago to stop its computers from scanning the inboxes of Gmail users for information to personalise advertisements, the WSJ said.

In order to calm its customers’ worries about the common practice in the industry, Frey reiterated Google’s pledge to vet those third-party apps and services with possible access to sensitive Gmail data.

“Before a published, non-Google app can access your Gmail messages, it goes through a multi-step review process that includes automated and manual review of the developer, assessment of the app’s privacy policy and homepage to ensure it is a legitimate app, and in-app testing to ensure the app works as it says it does,” she said.

She said Google would not allow apps to pose “as one thing and do another, and (they) must have clear and prominent privacy disclosures.”

“Before a non-Google app is able to access your data, we show a permissions screen that clearly shows the types of data the app can access and how it can use that data,” Frey said.

She advised Google users to use the company’s Security Checkup tool to check what devices have logged into their accounts, which third-party apps have access to their Gmail, and what permissions those apps have.

She said Google works hard to ensure companies and individuals do not misrepresent themselves and ask only for the relevant data they need for their specific function.

“No one at Google reads your Gmail, except in very specific cases where you ask us to and give consent, or where we need to for security purposes, such as investigating a bug or abuse,” Frey said.

Prof. Akin Abayomi, Commissioner for Health in Lagos State, has warned those ineligible for the Phase One COVID-19 vaccine to stay away from the 88 designated vaccination centres.
byTayo Aderinola
No comments 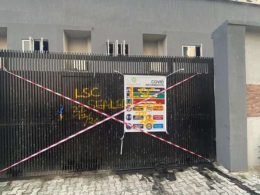 The Lagos State Safety Commission has shut 430 event centres and night clubs across the state for violating COVID-19 protocols.
byTayo Aderinola
No comments