This was no surprise for many of us in nations where Cambridge Analytica’s parent company, SCL Group, has long been a silent player, including in my home country of Kenya.

SCL Group is open about having “conducted behavioral change programs in over 60 countries,” describing itself as a service that provides data, analytics, and strategy to “governments and military organizations worldwide.” The firm has been involved in more than 200 elections across the globe, often through shadowy subsidiaries like Cambridge Analytica, in a wide range of countries including Australia, Italy, Britain, Czech Republic, Ukraine, Brazil, India, Malaysia, and Mexico.

From almost its very beginnings, SCL Group used African politics as a testing ground for influencing the behavior of the voting public.

In South Africa in 1994, Nelson Mandela was running for president with the African National Congress. With apartheid hanging in the balance, unresolved tensions between the Zulu community, the nation’s largest ethnic group, and the ANC resulted in often-violent clashes. SCL Group claims they were invitedto curb the escalating tensions, though it remains unclear who hired it and exactly what role it played.

After September 11, 2001 SCL Group rebranded itself as a data company that could help major players navigate a brave new world through “psychological warfare” and “influence operations.” The firm worked strategically on elections to influence independent, undecided, and dormant voters to benefit their client running for office.

But it is SCL Group’s involvement in the Kenyan elections of 2013 and 2017 that are especially chilling in light of the recent news about meddling in the U.S. election.

As I’ve reported elsewhere, Kenya has received billions of dollars in funding since 2012 (with planned disbursements through 2022) from the United States, United Kingdom, and the European Union to fight a holdover proxy war in Somalia under the banner of a “war on terror.” This proxy war began with U.S. backing in 2006 against Islamists Courts Union. From there it escalated, with its militant wing Al Shabab emerging victorious after the Union was defeated. Following the involvement of the Kenyan military in October 2011, there have been unprecedented terror attacks within Kenya including the Westgate mall terror attack, increased xenophobia towards innocent Kenyan nationals of Somali descent, and rampant graft of military aid in both Somalia and Kenya. Incidentally, since the Kenyan arm of the proxy war began, Western companies have “discovered” oil in both Somalia and Northern Kenya.

Into this environment of African political greed and Western opportunism walks SCL Group.

Kenya’s current President Uhuru Kenyatta, worth $500 million, made his first successful bid for the presidency in 2013, when he won against opposition leader Raila Odinga.

Odinga had previously served as Prime Minister following a devastating 2007 presidential election where widespread violence erupted after incumbent Mwai Kibaki was abruptly declared winner—contradicting a televised tally process that appeared to favor Odinga. In fact, former U.S. Ambassador to Kenya Johnnie Carson recently said on an episode of Pod Save the World, “Although it is highly disputed, I believe in that 2007 election that Raila Odinga actually won.”

Come 2013, Odinga found himself up against Kenyatta, who was understood at the time to employ an opaque British firm to run his glitzy Jubilee Alliance campaign (rebranded in 2016 as Jubilee Party).

According to a damning exposé by the United Kingdom’s Channel 4, Mark Turnbull, then the managing director of Cambridge Analytica Political Global, affirmed the company “ran” Kenyatta’s campaigns in 2013 and 2017 from soup to nuts. In the Channel 4 video Turnbull states, “we have rebranded the entire party twice, written the manifesto, done research, analysis, messaging. I think we wrote all the speeches and we staged the whole thing—so just about every element of this candidate.”

After Kenya’s polarizing 2007 elections, Uhuru Kenyatta and five others, most tied to Jubilee, were charged by the International Criminal Court for inciting violence, promoting hate speech, rape and hate crimes. Charges were dropped in December 2014 after dozens of witnesses recanted or disappeared and the government refused to cooperate. In this climate, Ugandan political scientist Mahmood Mamdani dubbed 2013 the “ICC Election” because an embattled demagogue emerged victorious against a modulating force of law and order.

Following both the 2013 and 2017 elections, Odinga went to Kenya’s Supreme Court claiming election fraud. His 2013 case was dismissed for insufficient evidence, but in 2017, to everyone’s surprise, he won—without support from the Western nations which had declared the original results free and fair. For the first time in African history, a presidential election result was overturned for “irregularities” and “illegalities.”

Unrest and intimidation surrounding Kenya’s fraudulent August 2017 election ended in dozens of deaths (many facilitated by the state). This included the murder of Chris Msando, national manager of the computerized voting system, slain just a week before the election.

Anticipating a flawed outcome, Odinga called for an election boycott and only 48 percent of Kenyans turned out to vote in the court mandated rerun of October 2017 (over 79 percent had participated in the original August election). Predictably, Kenyatta won in a cartoonish victory with 98.25 percent of the vote.

The current mood is Kenya is not unlike that in the United States after Donald Trump’s election victory—including a frustrated resistance movement.

Many citizens feel cheated, having had just four presidents serve the nation in fifty-five years of independence. The heartbreak in 2017, with its brutal violence and the stunted almost-election of Raila Odinga, was a another missed opportunity for genuine change. Knowledge of Cambridge Analytica’s role in the corruption of the electoral process only exacerbates a naked cynicism about modern nation-building that is deeply tragic.

And there’s no sign that such activity will disappear. Following the scandal unleashed by whistleblower Wylie, SCL Group—and its subsidiaries, including Cambridge Analytica—“officially” closed shop. But it remains largely intact in the form of a brand-new firm Emerdata, boasting many of the same executivesof SCL Group, and the same data mining mission.

As Americans grapple with interference in their own elections, Kenyans are moving forward from stolen political victories and violence stoked by a private Western entity pushing the financial expediency of rightwing populism over democratic freedom.

Agunda Okeyo is a writer, producer, organizer, and activist who writes from a global perspective about race, gender, politics, culture, books, film, and comedy. She’s @AgundaOkeyo on all social media. 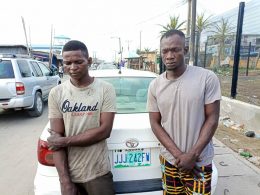 The operatives of the Lagos State Police Command attached to Ilasan Division on 3rd August, 2021, at about 9.30am arrested two (2) suspected armed robbers, Samson Tella, m, 37 and Raphael John, m, 21, who specialize in One Chance robbery and have been terrorising Lekki/Ajah axis of Lagos State.
byLateef Idris
No comments 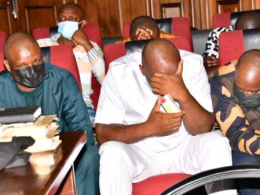 The Ooni of Ife, Adeyeye Ogunwusi, has confirmed the birth of a baby boy, in the early hours…
byTayo Aderinola
No comments

No fewer than 60 indigenous distribution companies patronising products of Grand Cereals Limited, were on Friday awarded by…
byTayo Aderinola
No comments