Underwriting companies in the nation’s insurance industry appear to be in dire straits and their woes compounded by the recent flood disaster ravaging about 22 states, which has resulted in the loss of life and property , with an estimated cost of about N1 trillion.

•NAICOM, operator’s mindful of incidence effect
Underwriting companies in the nation’s insurance industry appear to be in dire straits and their woes compounded by the recent flood disaster ravaging about 22 states, which has resulted in the loss of life and property, with an estimated cost of about N1 trillion.

Industry experts, who spoke with The Guardian and pegged the cost at about N1 trillion, going by the number of property damaged, thus far, noted that the actual picture would come after assessments by government agencies.

More worrisome is the level of insurance acceptance among Nigerians. They claimed that despite Nigeria’s huge population of over 200 million, insurance is still at the level of less than one percent penetration in the country

They, however, claimed that by the time the flood recedes, a lot would be revealed, including the actual number of lives lost, and the exact amount of property lost would be huge in the sector.

They said those, who have had their properties insured with the premium paid up to date would be adequately compensated.

According to them, “in insurance, there are products offered by operators that could cover the flood incidents across the country. People, who have insurance and have insured their homes, are well covered and would get their claims settled appropriately.”

The incident, according to them, would serve as a lesson to house-owners across the country that have not insured their assets.

Operators believe that the situation called for a new idea in stemming the tide by encouraging stakeholders’ engagement on the depression, saying that it was high time governments at all levels began to take advantage of insurance in the mitigation of such risks to cushion the losses by the people as obtainable in other climes.

The Federal Government, through the Minister of Humanitarian Affairs, Disaster Management and Social Development, Hajiya Sadiya Umar Farouq, revealed that the floods, which struck Nigeria’s waterways when the Camerounian authorities released water from their Lagdo Dam, affected about 2.5 million persons.

According to the minister, of this figure, 1.3 million people were displaced, 2,407 persons were injured, and 603 persons lost their lives. She said this while affirming Nigeria’s preparation to meet with the Government of the Republic of Cameroun over the release of water from the Lagdo Dam.

In an effort by The Guardian to ascertain the exact figure of those who have insured their lives and properties among affected citizens from the National Insurance Commission (NAICOM) explained that insurance coverage on flooding incidence in the insurance business is not mandatory by law, but it is optional to the public.

To this end, many of the victims might have no form of insurance policy, their lives and properties wasted at the cost of the incidence from the underwriting companies in the sector.

Specifically, the Head of Corporate Communications and Market Development, NAICOM, Rasaaq Salami, who spoke to The Guardian on the development, through phone conversation expressed the commission’s sympathy with victims of the flood disaster and declared the commission’s commitment towards ensuring prompt settlement of claims by insurance companies.

According to him, with the level of disaster, insurance companies are bracing up for claims settlement to policyholders that were affected by the flood ravaging many parts of the country.

He added, “It is a time to implore the governments to convoke stakeholders’ engagement and also factor in insurance into the management of disasters in the country, to free governments funds often expended on palliatives for other pressing public good,” Salami said.

Insurance penetration in Nigeria is still very low, compared to acceptable levels in other countries.

The former Managing Director/Chief Executive Officer of First Bank of Nigeria, FBN Insurance, Valentine Ojumah, said despite the wide room for growth, life assurance is still at a low per cent penetration, while general insurance has just about 1.5 per cent penetration.

In collecting relatively small premiums from many individuals in the economy, he said, insurers were able to pull together, better than other institutions, a large pool of funds that could be invested for short or long-term periods.

Industry observers, who also spoke to The Guardian on the development in the sector, said at this stage of insurance practice in Nigeria, the operators have no choice than what they are currently doing because though the industry is older, its level of acceptance, stage of development compared to its sister sector, the banking industry, is still not satisfactory.

But despite this, the insurance industry is still battling with several challenges that have retrogressed its growth.

Speaking to The Guardian about the incidence to ascertain the number of farmland damaged, the Assistant General Manager of Corporate Services, Nigerian Agricultural Insurance Corporation (NAIC) Magdalene Omosimua, said the flood is ongoing and as a federal government we are waiting for the flood to be receding by then it is now possible to know the extent of the damages.

According to her, NAIC has collaborated with the National Emergency Management (NEMA) to carry out the assessment of the flood and this effort will be done in batches before we could be able to come out with figures and the extent of damages done by the flood to Nigerians.

Earlier, the NAIC sympathised with flood victims across the country, noting that the corporation shared the pains and agony of victims and vowed to stand with them during this trying period.

“Therefore, as a caring and responsive organisation, we are using this medium to assure our insured clients that their genuine claims will be given urgent attention to enable them to go back to living their normal productive lives.

“In the same vein, NAIC wishes to advise that the property and business endeavours of our teeming citizens are promptly insured. 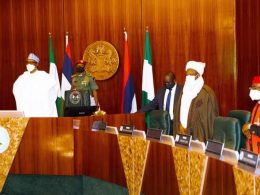 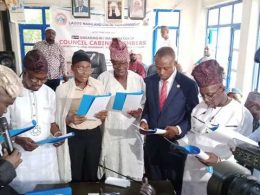 To God be the glory for great things He has done. With a grateful heart, I want to express my heart felt gratitude to Almighty God for His mercies unto us all for witnessing today.
byLateef Idris
No comments

Public Servants, particularly those in the services of the Lagos State Government, must be result-oriented if they are…
byLateef Idris
No comments

A 22-year-old bus conductor, Olajide Oyenuga, who allegedly burgled his neighbour’s house with an intent to steal, was…
byTayo Aderinola
No comments