As the Super Eagles file out to tackle the Strakkamir Okkar of Iceland at the Volgograd Arena, the players must have it at the back of their mind that Nigerians expect nothing less than a victory from the must-win-match.

It is against this backdrop that we expect the Mikel Obi-captained squad to play the game of their lives to grab the three points at stake that would likely prolong Nigeria’s campaign at the Coupe de Mundial.

The News Agency of Nigeria reports that Nigeria currently sits at the bottom of Group D standings with zero points, while the Vatreni of Croatia tops the table with three points followed by Albiceleste of Argentina and Strakkamir Okkar with one point each.

With the unsavoury scenario staring the team in the face, the Super Eagles would have to raise the level of their game against their rugged Icelandic opponents who look poised to take the wind out of the sails of the Super Eagles.

Mikel and his colleagues should know that if Nigeria should fail to defeat Iceland in the crucial showdown at Volgograd, their names would go down into the hall of infamy in the annals of Nigerian football; hence the need for them to go excel.

By now Coach Gernot Rohr must have reviewed the video recordings of the team’s 2-0 loss to Croatia, and work very hard to avert mistakes made in that match, and to perfect the strategy and tactics needed to battle the Strakkamir Okkar.

Judging from the robust performance they put up against the Albiceleste in the 1-1 draw, the Strakkammir Okkar would likely adopt the ultra-defensive tactics they used to frustrate Argentina in their opening match.

With this in mind, we expect Rohr to come up with the right team selection to articulate his strategy and tactics for the match against the Northern European team.

The Super Eagles must play as a functional coherent team in the field and guard against conceding needless free kicks around our 18 yard box area, which Gylfi Sigurdsson, their dead ball specialist could exploit to punish Nigeria.

In the defence area, we expect Leon Balogun, Troost Ekong, Brian Idowu and Abdullahi Shehu must be vigilant to ward off lightning counter attacks from the Strakkamir Okkar who would strive to catch our defence off-guard.

We expect to see a more vibrant display from the Super Eagles in the midfield area, anchored by Mikel in the holding role alongside John Ogu/Wilfred Ndidi, while Oghenekaro Etebo should be allowed to rove.

There was no creative play from the Super Eagles in their opening match against the Vatreni, which denied Odion Ighalo the defence splitting passes, he and other attacking midfielders like Victor Moses and Alex Iwobi, could have exploited.

Our strikers, either Ighalo, Simeon Nwankwo or Kelechi Iheanacho must be clinical in front of the goalpost of the miserly defence of Iceland, while the midfielders should be highly mobile and compact to contain forays from their opponents.

Ideally, we would love to have Rohr deploy a two man strike force against Iceland, but the coach is actually the man at the helm to decide team tactics.

But Rohr must strive to get the team’s architecture right this time around, having studied earlier tapes of the friendly matches played by Iceland against Ghana in that 2-2 draw and the way they lined up against Argentina.

Before the team jetted out from their Essenteki base on Wednesday for Volgograd, Rohr told the media that he was already aware of the various suggestions being thrown at him, on how the Eagles should play against Iceland.

“We have watched the game against Croatia to see our mistakes so that we can correct them.

“Our match on Friday will be a tough game and we have to be at our best and be more professional with our defending, especially from set-pieces.

“We have to be fully focused and not lose concentration all through the game. I believe with hard work we can get a good result.

“In truth, there is no need to add to the pressure we have now. More pressure on the team will not necessarily translate to better result,’’the German technical adviser said.

In the same vein, Mikel also vowed to play any role that will be assigned to him to help the Eagles soar over the hard fighting Icelandic team.

“I am ready to play in any position the coach wants me to play. I am comfortable with either a defensive or offensive midfield role.

“The most important thing is the team and nothing else,’’ said the former Chelsea FC of England midfielder.

Gambari Is The Right Man For The Job, Says Sanwo-Olu

The Lagos State Lands Bureau, through the Directorate of Land Services, has harmonized its demand notice/assessment letter to…
byTayo Aderinola
No comments 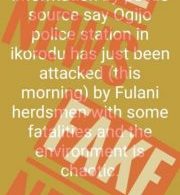 The Lagos State Police Command wishes to clear the air that there was no attack on Ikorodu Police Station, Igbogbo, Lagos State or any of its police formations in the State.
byLateef Idris
No comments 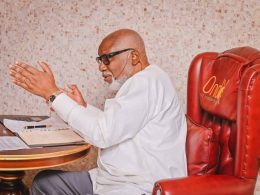 Rotimi Akeredolu, governor of Ondo State, has confirmed the arrest of terrorists who carried out the horrendous massacre of worshippers at St. Francis Catholic Church, Owo on June 5, in which about 40 people were killed and several others injured.
byLateef Idris
6 shares
6
0
0
No comments