Hajiya Habiba Lawal, Acting Secretary to the Government of the Federation (SGF) said the government was making efforts to commence local manufacturing of sports equipment.

Lawal made this known on Saturday at the official unveiling, launch and presentation of sports equipment to 2000 primary schools by National Lottery Trust Fund (NLTF) in Yola.

The acting SGF, represented by Dr William Alo, Permanent Secretary, Special Duties in the office of the SGF, said local production of the equipment would enhance the accessibility of sports equipment to many potential athletes.

She said the provision of sports equipment to primary school pupils was to promote youth participation in sports.

She added that Federal Government was committed to revitalizing rotary for revenue generation.

She noted that the revitalization of the sector would contribute to government drive toward economic diversification.

According to her, Federal Government will harness the rotary potential for the generality of all Nigerians.

In his remarks, Gov. Mohammed Bindow of Adamawa said his administration had already put measures in place to boost sports in the state.

Bindow, who was represented by Mr Martins Babale, the Deputy Governor, said sport was a major uniting factor among diverse groups.

He said the administration was built on three cardinal objectives which included development, peace and poverty reduction.

He added that the administration had achieved tremendously in the area of infrastructure, noting that revatilisation of sports would engender peace and unity in the state.

According to him, sports does not have ethnic, religion and region, and everybody is one.

Bindow commended the NLTF for supporting grassroots sports and promised to build on it.

In his remarks, Mr Julius Kadala, the Commissioner for Education, gave the assurance that the equipment would be safeguarded by the management of the benefiting schools.

He said that the declaration of a state of emergency in education was to intervene in the rehabilitation of physical structures, teaching and learning, as well as sports development in schools.

The commissioner thanked the NLTF for the support.

The various equipment such as balls, goal posts, nets, and other sporting kits were distributed to 55 schools in Adamawa. 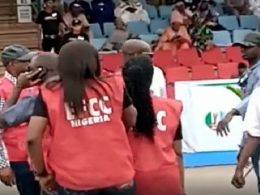 Operatives of  the Economic and Financial Crimes Commission ( EFCC) on Tuesday monitored the All Progressives Congress (APC) Special Convention at the Eagle Square venue of the event in Abuja, FCT. .
byTayo Aderinola
No comments

The governorship candidate of the All Progressives Congress (APC) in Lagos State, Mr Babajide Sanwo-Olu, has promised to…
byTayo Aderinola
No comments