Super Eagles’ fans have advised Chelsea midfielder, Victor Moses to rethink his decision to quit the national team following his announcement yesterday that he would no longer play for Nigeria.

The Chelsea winger, 27, has played 38 times for Nigeria, scoring 12 times since making his debut in 2012.Reacting to Moses’ decision to retire from international duty, sports analyst, Sabinus Ikewuaku said the Chelsea star was toeing the same route, which never worked for any of his predecessors. “Moses should ask Taye Taiwo, Obafemi Martins and Vincent Enyeama, who decided to dump the national team when they were still relevant to the side.

“At the end of the day, they started angling to return to the team because you are only relevant when you are still active. Most of these players think they can use Nigeria to secure their club careers after which they will dump the Super Eagles.

“The truth is that most of the European clubs put pressure on African players to quit international football, but once they see any of their nationals as good as the foreigner, they will switch to the local boy and dump the foreigner. I wish Moses all the best any way.”

“It is not easy for foreign players, especially those from Africa, to play for big clubs. The African players are forced to work twice as hard as their European counterparts and the rigours take their tolls on them physically and psychologically.

“I am sure Moses had a clear examination of his situation before choosing to retire from international football. This season looks daunting for him and he needs undivided attention to succeed under Maurizio Sarri.” Before choosing to play for Nigeria, Moses had previously represented England up to Under-21 level, while coming through the ranks at Crystal palace.

“I have experienced some of the best moments of my life wearing the Super Eagles shirt and have memories with me that will last a lifetime,” he said.“However, I feel that now is the right time to step away in order to be able to focus fully on my club career and young family, as well as to allow the next generation the opportunity to step up and to flourish.

“Thank you for the memories and good luck to the team for the future.”Moses won the Africa Cup of Nations with Nigeria at South Africa 2013, and represented the nation at two World Cups, Brazil 2014 and Russia 2018.Moses, whose first team prospects at Stamford Bridge look far bleaker under new manager Maurizio Sarri than during Antonio Conte’s time in west London, made his international debut in 2012 against Rwanda, going on to score 12 goals across six years. 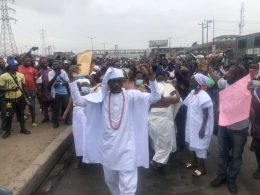 The venue of the planned Yoruba Nation rally was the Gani Fawehinmi Park in Ojota, Lagos. Like soldier ants, over 20 patrol vehicles belonging to the Police, the DSS, TASKFORCE and OP MESA (military) were there as early as 6.49 am. Their mission was to make sure the rally did not hold.
byLateef Idris
No comments

Nobel Laureate, Prof Wole Soyinka, has warned the Federal Government against the proposed establishment of Ruga settlements across…
byTayo Aderinola
No comments

First Bank of Nigeria Limited has announced its sponsorship of the 5th edition of the Chief Olusegun Obasanjo golf tournament, organized by the Abeokuta golf club. The competition, which is scheduled to hold on Saturday, 14th August 2021 will have Chief Obasanjo perform the ceremonial Tee-off to the glamour of the 150 golfers participating from across Nigeria.
byTayo Aderinola
No comments

The EFCC has released the photographs of some of the jewellery seized from Diezani Alison-Madueke, valued at $40…
byTayo Aderinola
No comments