Temitope Olaniyan who competed in the Para-Athletics won 3 gold medals in the 200m, 400m & 800m respectively for Male category set a new record in Deaf 400m men final in 49.36 seconds, at the Ogbemudia Stadium, Benin and was quite elated that he was able to prove his worth among the athletes of Team Lagos at the festival.

The 23 years old deaf Athlete averred that: “My coming to Edo has been a blessing as I gained experience, exposure and won Medals for Lagos State. I feel so very much happy and great for winning 3 gold medals” an excited Olaniyan posited.

“I will like to thank the Almighty God that made it possible for me to be in Edo 2020 National Sports Festival. I want to say a very big thank you to the Governor of Lagos State, Mr. Babajide Sanwo-Olu, for approving the participation of Team Lagos at the Edo 2020 Festival and the Management Team of the Lagos State Sports Commission”.

“I will also like to appeal to Mr. Governor to consider and look into Deaf Sports in terms of sponsoring us especially for the Deaf World Athletics in Poland and Deaflympics in Brazil. Deaf athletes have the strength, the ability, the team spirit to excel to any level in the world and to make the Lagos State and the Nigeria proud’ he asserted.

“I would also appeal to the Chairman, Mr. Sola Aiyepeku and the Director General, Mr. Oluwatoyin Gafaar to continue to show us love, push our sports to a greater level so that Deaf Sports will be developed more than now. These people have been there for us. I will like to also thank the Chairman and the Director General for making it possible to include Deaf Sports in the Edo 2020 National Sports Festival”.

“As you all can see, despite the number of deaf athletes in this Festival, we still won 6 gold medals altogether to make Lagos State proud and to make Lagos State Deaf Sports proud. I also broke a record time in Deaf 400m men final of 49.36 seconds”.

“Lastly, I want to thank my parents, siblings and friends that are supporting me in prayers and also encouraging me to go into sports. I was not neglected or ignored by my parents to participate in sports. Thank you all.”

Olaniyan says he dreams of making it big in Sports and education if given the needed support. He said: “My ambition in Athletics is to travel to Deaflympics in Brazil 2022, Deaf World Athletics in Poland this year’s August 2021 and more importantly, I have this ambition to continue my education and to be a great deaf athlete in Africa and World.”

Before the departure of the Deaf Sports Athletes to the Sports Festival, the Chairperson of the Association Mrs. Adelola Adewole promised to reward all medalists of the association to the National sports Festival.

The association actually projected for six gold medals and it was achieved.

A middle-aged businesswoman, Nkechi Opara, on Thursday appeared before the Chief Magistrates’ Court in Ikeja for allegedly defrauding…
byTayo Aderinola 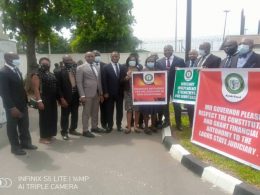 The Four branches of the NBA in Lagos state, namely Lagos, Ikorodu, Epe and Badagry are at the Lagos House, Marina to “visit” Governor Babajide Sanwo-Olu, in adherence to the directive of NBA President, Olumide Akpata.
byLateef Idris

…continue to work in line with the State Government replicating the T.H.E.M.E.S Agenda of Governor Babajide Sanwo-Olu’s administration…
byTayo Aderinola